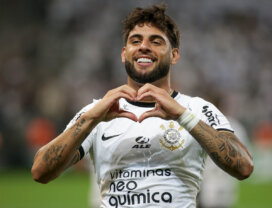 One of the players who most enjoyed the victory of the Corinthians over Água Santa, by 3 to 0, was Yuri Alberto. The striker was essential, opening the scoring and giving two assists to Róger Guedes.

That game showed how important he is for the game of the Corinthianssince the athlete was absent in the defeat against Red Bull Bragantino.

The hiring of Yuri Alberto was very controversial due to the way it was handled, with the Corinthians transferring young players to Zenit, from Russia. The striker thanked all the efforts made by the board to ensure his stay.

“It takes a while for it to sink in. I am very grateful for all the effort, affection and the bet they are making on me. I hope to reciprocate. Very special tonight.”

Yuri Alberto took advantage of the good moment to defend Fernando Lázaro’s work at Timão. After the defeat in the debut, the coach’s work was highly criticized by the fans for the lack of attack power.

“We are very closed. We’re getting used to his style of play and we’re really enjoying it. We will continue to give him strength because everything is working out, ”he said.

In addition, Yuri Alberto highlighted the improvement of his football with the new game scheme, which has two strikers. That’s because it can be more centralized, a position of your preference.

“With this game system with two attackers, we have more freedom to fall on the wing. I like to play centrally, but in this scheme I’m forced to fall to the wing. It worked, the times I fell, there were goals ”, he concluded.