why the Portuguese is playing his first match against PSG? 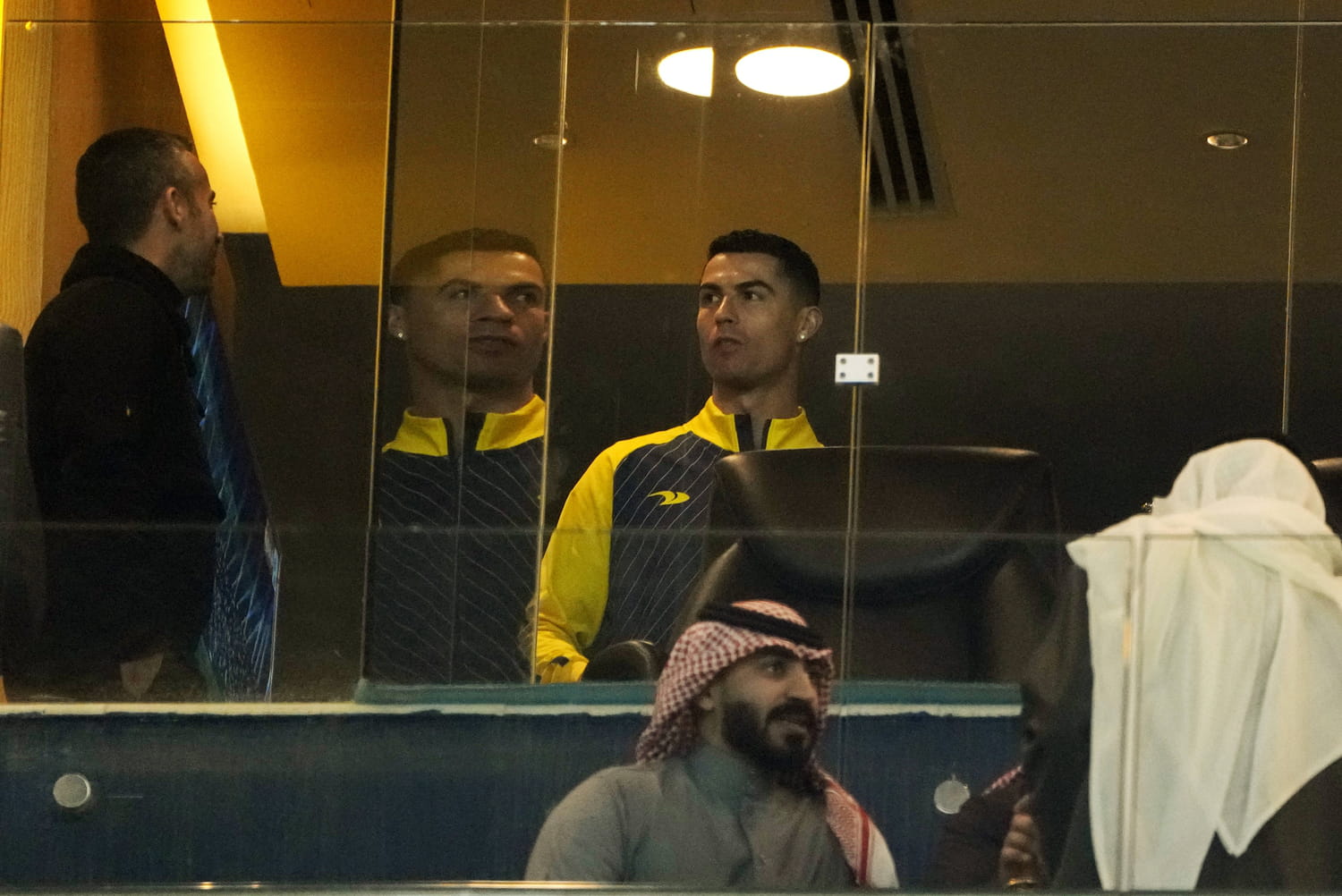 Transferred to Saudi Arabia just after the World Cup, Cristiano Ronaldo will play his very first match this Thursday, January 19.

His transfer caused a stir on the football planet. Cristiano Ronaldo is now a player of the Al Nasr club in Saudi Arabia and will receive the modest sum of 200 million euros per year. But for the time being, the Portuguese has not yet played a single match with his club and will play his very first meeting against PSG this Thursday, January 19 as part of the capital club’s Qatar tour. The Portuguese was even promoted to captain for this gala poster with the team only made up of players from Al-Nasr and Al-Hilal.

For his official debut with the Al Nasr club, it will be necessary to wait until January 22 and a championship match. For now, the Portuguese has watched his teammates’ first games from the bench or the dressing room as he had to serve a two-game ban after hitting the hand of a 14-year-old supporter following Manchester United’s loss at Everton (1-0) last November.

Short biography of Cristiano Ronaldo Cristiano Ronaldo dos Santos Aveiro, better known as Cristiano Ronaldo, is one of the most gifted football players of his generation. It was at the age of 12 that the young Cristiano Ronaldo left his island of Madeira where he was raised to join the benches of the Sporting Portugal training center. Very quickly, the exceptional performances of the sportsman interested the English club Manchester United which recruited him in 2003. The 2007-2008 season revealed his talent to the whole world and allowed him to hang both the English championship and the trophy of the Champions League on its still nascent record.

In 2009, the Real Madrid club managed to bring the footballer to Spanish soil. The financial transaction then concluded for the transfer of the player ranks among the most expensive in the history of football with compensation of 94 million euros paid to the British club. The Madrid club was apparently right to make this bet since Cristiano Ronaldo becomes the star of the club year after year. With Real, he played 438 games for 450 goals and won 16 titles in nine seasons, including four Champions Leagues. Cristiano Ronaldo will then join Juventus of Turin in 2018 for another pharaminous amount (100 million euros) and to breathe new life into his career (two victories

ires in the championships, an Italian Cup and two Supercups but no European raid), then, after three seasons (134 match and 101 goals) will find Manchester United in 2021. He is also the captain of the Portuguese national team.

A hard worker and great competitor, the footballer has forged an extraordinary physique which has earned him the title of sexiest player of the year on several occasions. It is also thanks to this image that he was offered several major advertising contracts. On the private side, Cristiano Ronaldo is the happy father of five children, the last of whom is a girl born on April 18, 2022. After having chained the conquests, the player is officially in a relationship with the Spanish model Georgina Rodriguez since 2017.

Crowned Ballon d’Or in 2008, 2013 and 2014, 2016 and 2017, the striker managed to hoist Portugal to the final of Euro 2016, during which he beat France. After winning his 5th Champions League, Ronaldo left Real Madrid in the summer of 2018 to join Juventus Turin for 105 million euros. He won Serie A and became the first player in history to win the national championships in England, Spain and Italy. The player won the Italian Super Cup in 2019 against AC Milan and became Italian champion shortly after. In May 2021, he scored his 100th goal for the Turin team.

Since 2003, he has made more than 170 national selections for a total of 115 goals scored. He revealed himself to supporters and the general public on the occasion of Euro 2004, as well as at the Olympic Games in Athens, the same year. Still within the Seleção, Cristiano Ronaldo confirmed his talent and his performances with the 2006 and 2010 editions of the World Cup, as well as Euro 2008. He became captain of the Portugal team in 2007. Crowned Ballon d’ gold in 2008, 2013 and 2014, 2016 and 2017, the striker managed to hoist Portugal to the final of Euro 2016, during which he beat France. The player is still talked about during the 2018 World Cup qualifiers, during which he scored 4 goals in a match against Andorra. Shortly after, he became the national team’s top scorer of all time, ahead of Iranian Ali Daei.

Returning to Manchester United in 2021, Cristiano Ronaldo had a complicated start with a 2021-2022 season, marked by the difficulties of the Red Devils, sixths of championship English and unable to qualify for the Champions League.

The Portuguese has one of the finest records in world football. Since turning pro, Cristiano Ronaldo has won 5 Champions Leagues, 6 national championship titles, but also Euro 2016 with Portugal. All of his performances have earned him five Ballons d’Or, the latest having been obtained in 2017.

His collective record also includes 3 Premier League titles, 2 La Liga titles and 2 Serie A victories, respectively with Manchester United, Real Madrid and Juventus FC. Note that Cristiano Ronaldo is the only Real Madrid player to have scored more than 60 goals in a single season (2014-2015). He is also the club’s top scorer with 216 goals to his name. In the major European championship, he was offered the title of top scorer with 400 goals scored. This also applies to the UEFA Champions League and its 120 goals.

In the space of 20 years of career, all his performances have brought him five Ballons d’Or, the last one having been obtained in 2017. Among his personal distinctions, Cristiano Ronaldo has also been awarded the title of best player in several competitions and institutions such as FIFA and UEFA. He is the winner of numerous Golden Soccer Awards, Onze d’or, Goal 50 and Fan Best World Awards. Between 2006 and 2012, Portugal awarded him the prize for the best Portuguese player for 6 consecutive seasons.

We no longer count his nominations and his distinctions as top scorer, best player of the season and man of the match. For this last distinction, we can notably mention the 2010 World Cup during the matches against the Ivory Coast, Brazil, as well as North Korea. Cristiano Ronaldo also stood out against Russia, New Zealand and Mexico in the 2017 edition of the Confederations Cup. In 2020, his entire career is rewarded with the Golden Foot. The same year, he became a member of the Ballon d’Or Dream Team in the category « Eleven of Internet legends ». He is also the winner of the Di Stéfano prize. In more than 1,060 matches played, all club and national selections combined, Cristiano Ronaldo scored 777 goals. As such, he is one of the most successful players in football history.

On June 6, 2020, Cristiano Ronaldo became the first billionaire footballer in history according to Forbes magazine. By engaging with the Saudi club Al Nassr, he must receive a salary estimated at 200 million euros over two and a half years. Cristiano Ronaldo has been the subject of numerous advertising contracts for famous brands. He is also the headliner of many football video games, notably for FIFA and Pro Evolution Soccer licenses. The footballer is involved in various humanitarian actions by raising funds or by organizing auctions, charity matches. It makes donations for the benefit of associations and victims of natural disasters. Many monuments and establishments bear his name, such as Cristiano Ronaldo Airport in Madeira, formerly Santa Catarina Airport. He has also created CR7 stores and opened an eponymous museum, managed by his brother Hugo where the Portuguese star displays his trophies.

Cristiano Ronaldo shares his life since 2016 with Georgina Rodriguez. Present in Madrid for her professional modeling activities, the young woman met the footballer and formalized their relationship in December 2016. A few months later, Georgina announced her pregnancy and gave birth to a daughter named Alana Martina in November 2017. Cristiano Ronaldo also three other children born to surrogate mothers: Cristiano Jr., Mateo and Eva Maria.

Cristiano Ronaldo’s family originates from the island of Madeira. During his childhood, he experienced poverty, in particular due to a period of unemployment of his father. Football is first of all a means of escape before becoming a means of subsistence. He also has a brother named Hugo, as well as two sisters: Elma and Cátia Lilian. His father José Dinis Aveiro died in September 2005.

‘Someone out there slaughtered my daughter’: Lindsay Buziak’s father still seeks answers