‘We are united and strong’: Westminster Tết parade marches on 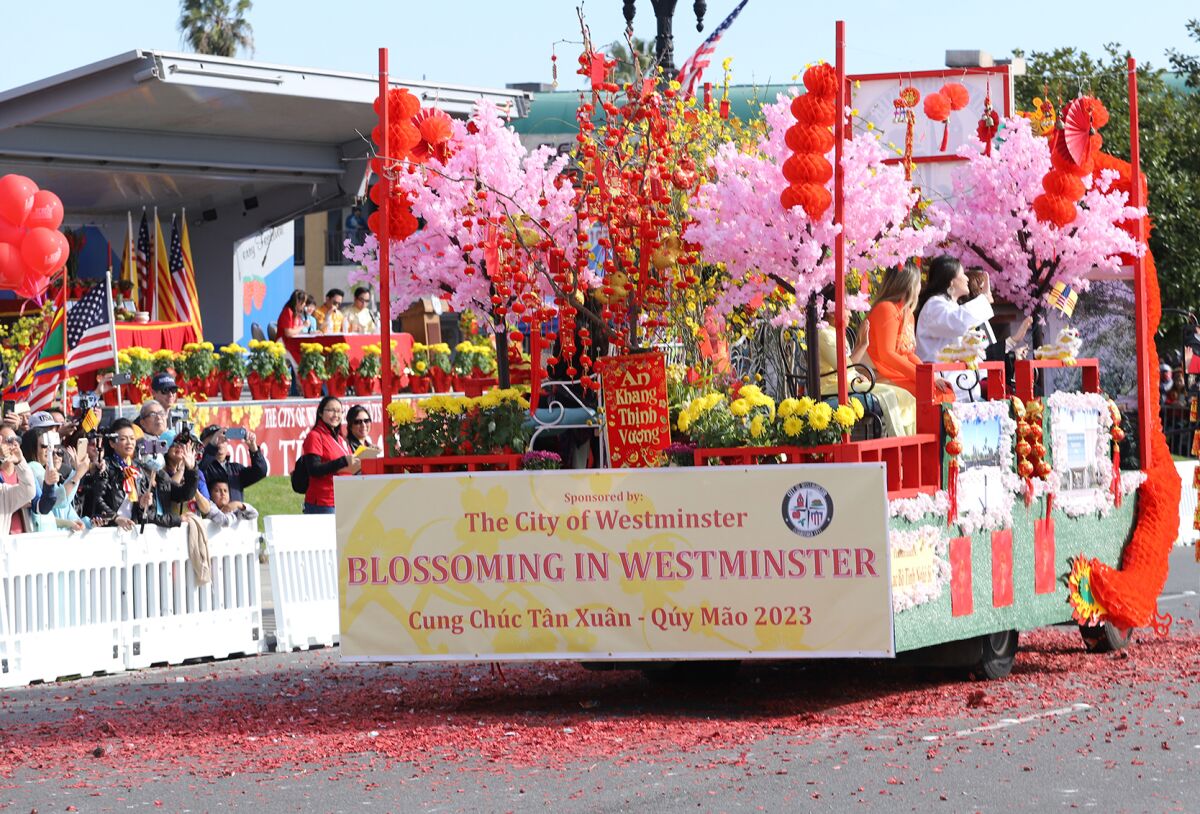 The Westminster Tết parade has been held in the city for nearly 20 years, and on Jan. 22 the parade marched on, in spite of a tragic shooting in Monterey Park on the eve of Lunar New Year.

“There was an atrocity that happened in Monterey Park, and our city, our police force and our school district decided to move forward because we are united and strong in that way,” said David M. Johnson, Westminster School District Board of Trustees president.

Tết Nguyên Đán, or Tết for short, celebrates the arrival of spring and a new year for the Vietnamese community. Westminster is home to Little Saigon, the unofficial Vietnamese capital of the United States. Westminster and surrounding cities contain the largest community of Vietnamese descendants outside of Vietnam.

The Westminster Tết parade is the largest event held in the city, and each year, Vietnamese around the world tune in to watch the event broadcast by local TV stations. Approximately 60 entries participated in this year’s parade that took place on Bolsa Avenue, beginning on Magnolia Street and heading eastbound on Bushard Street.

“Our school district participates in the parade annually,” said Johnson. “We also have our own parades and festivals at each of our 17 schools. The Lunar New Year is a big deal to us because we live in the center of Little Saigon.”

The 2021 census reported nearly 40% of Westminster’s population is Vietnamese, and Johnson estimated more than 100 families within the Westminster School District participated in the event.

“It was not just our Vietnamese American families,” Johnson said. “It was people of all ethnicity that live in our school district who wanted to participate and celebrate.”

Many families living in Westminster were forced to flee their country as a result of the communist takeover at the end of the Vietnam War, and their culture has shaped the community and the schools.

“We were the first school district in California that implemented dual-immersion language [instruction] of both English and Vietnamese,” said Johnson.

The Vietnamese Lunar calendar celebrates the Year of the Cat, rather than the rabbit, and depictions of felines were prevalent at the event, along with traditional lion dances.

The opening ceremony began with a performance of the National Anthem of the Republic of Vietnam and the National Anthem of the United States of America performed by the La Quinta High School marching band. Firecrackers were also lit, a tradition meant to ward off evil spirits in the new year, and continued throughout the day as surrounding Vietnamese-owned businesses also set them off.

Lunar New Year continues through the week, and Johnson said the school district will be part of other events happening in the county, including UVSA Tết Festival at the Orange County fairgrounds in Costa Mesa, where Westminster students will perform on Jan. 29.

“Demille Elementary School will be showcased at the Tết Festival,” said Johnson. “We will be demonstrating what we are doing with our dual-language program.”

Johnson said celebrations like the Tết parade and the upcoming festival are important for Westminster students and the city as a whole.

“It is important for them to keep their culture and their identity,” he said.

Support our coverage by becoming a digital subscriber.