Vasco must have news against Inter Miami; see the likely lineup 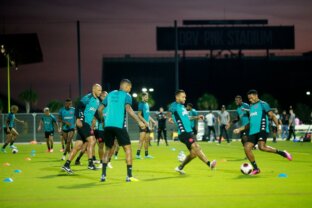 Vasco ends this Saturday night (21), at 9:30 pm, its participation in the Florida Cup, a pre-season friendly tournament. The last opponent will be Inter Miami, at Drive Pink Stadium, in Fort Lauderdale, in the United States.

The tendency is for coach Maurício Barbieri to make some changes in relation to the defeat in a friendly against River Plate (3-0), last Tuesday.

Three of the reinforcements for the 2023 season, goalkeeper Ivan, defensive midfielder Jair and striker Luca Orellano may appear among the starters for the first time. Of these, Ivan was the only one who has yet to debut. Another possible novelty is the entry of defender Anderson Conceição.

Barbieri has all the players who traveled to Florida, including goalkeeper Alexander, full-backs Edimar and Paulinho, defenders Ulisses and Miranda, midfielders Zé Gabriel and Alex Teixeira, as well as forwards Eguinaldo, Erick Marcus and Vinicius Paiva.

Vasco reserves in the Carioca Championship

Last Thursday, Vasco played its second game in the Carioca Championship. Again with reserves and youngsters from the base categories, the team started losing to Audax Rio, but sought a 1-1 draw at the Luso-Brasileiro stadium. Galarza scored the goal for Gigante da Colina. The team was commanded by Emilio Faro.

The trend is that next Wednesday, against Portuguesa-RJ, in the Luso-Brasileiro, for the fourth round of the State, Vasco should have the starters back.

The alternative team has not yet managed to engage in the competition and occupies only seventh place, with only two points won.