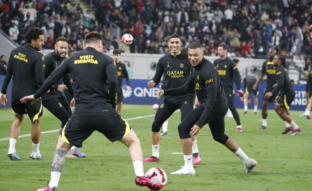 In a friendly match scheduled for this Thursday (19) Riyadh All-Star XI x PSG duel at 2 pm (Brasília time), at King Fahd Stadium, for the Riyadh Season Cup. The game marks the debut of Cristiano Ronaldo, signing of the most bombastic in Arab football. CR7, however, will not be easy. Messi, Neymar and Mbappé are confirmed.

Cristiano Ronaldo will make his debut for the new club and will captain the team for the match. After more than two years, the Portuguese is once again facing Messi, eternal longtime rivals. The last duel between them took place in 2020, when Juventus and barcelona played in the Champions League.

The match will soon be broadcast live on ESPN 3, on cable TV, Star+, OneFootball and PSG TV, streaming, and profiles PSG on Facebook, YouTube and Twitch.

Escalation of PSG against Riyadh All-Star

The team led by Christophe Galtier was defeated at the end of the week by Rennes, for the French Championship. Despite this, the technician does not intend to spare anyone and must climb maximum strength. Only Verratti and Nuno Mendes, who are recovering from injuries, will be left out. Just like Kimpembe, who will also be absent.

On the Saudi side, Al Nassr and Al Hilal joined forces to form the ideal lineup. Thus, it will be the first time that Cristiano Ronaldo will officially perform in the Arab world, even if not officially. Other big names in the local team are Anderson Talisca, Moussa Marega and Gustavo Cuéllar.