Santos has reunion in Copinha after a year; see details 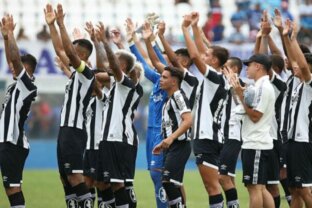 In a dramatic match against Fortaleza that was marked by a lack of energy and a goal in stoppage time, Santos secured a place in the Copinha semifinal. Now the team from Santos will face América Mineiro in the semifinals, which in turn eliminated Ituano, after a beautiful 3-0 victory.

It is worth mentioning that the boys from Vila left Fortaleza on the way after a 2-1 victory, with goals from Thiago Balieiro and top scorer Ivonei. On the other hand, Coelho was not aware of Ituano and won by an unquestionable 3 to 0. Finally, the duel that is worth a vacancy in the big decision of the Copinha is scheduled for next Saturday.

The meeting between Santos x América Mineiro will mark a rerun of this duel that took place in the last Copa São Paulo de Futebol Júnior. Namely, the teams also faced each other at this stage of the competition. It is worth remembering that on that occasion, Peixe ran over Coelho, winning 3-0 and securing themselves in the final against Verdão.

However, the boys from Vila ended up losing the Cup title in the decision to Palmeiras, who had Endrick in charge of their attack. That way, with a 4-0 on the scoreboard, Verdão got the 2022 Cup.

Fish and Rabbit Campaign in the 2023 Cup

To reach the decision, Santos has been presenting great football in this edition of Copinha. In short, of the seven matches played, Peixe won six and lost only once. In addition, he scored 14 goals and his defense was leaked six times. On the other hand, Coelho is having an impeccable campaign, with seven wins in seven matches played. The 100% campaign still has 19 goals scored and only three goals conceded.