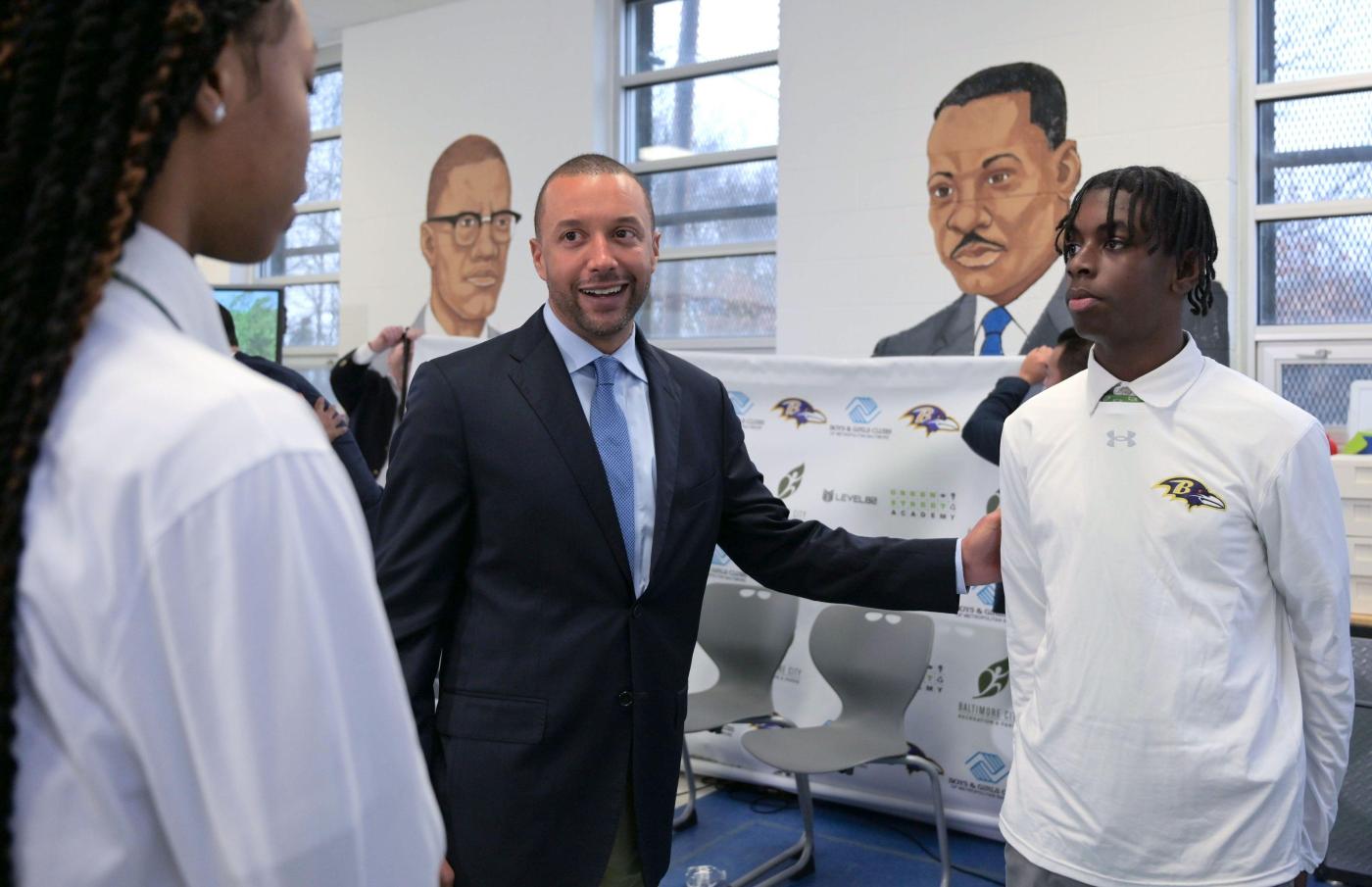 There was no home-field advantage for the football team at Green Street Academy in West Baltimore.

Since the private school moved to the 100 block of North Hilton Street, the Chargers did not have a field to call home. Players were forced to leave class early and carry their equipment onto buses that would take them to opponents’ fields.

On Thursday morning, Taylor and about a dozen of his classmates filled a room inside Hilton Recreation Center as the Baltimore Ravens and the Boys & Girls Clubs of Metropolitan Baltimore announced a $20 million gift from the NFL franchise and The Stephen and Renee Bisciotti Foundation to renovate the aging facility in the 2900 block of Phelps Lane.

The plan for the renamed Baltimore Ravens Boys & Girls Club at Hilton Recreation Center — which is about a Justin Tucker field goal away from Green Street Academy — involves the expansion of the current building into two structures totaling 25,000 square feet to accommodate a teen center as well as spaces for academic tutoring, community gathering and games. The project will also feature the construction of a lighted multi-purpose athletic field and two lighted outdoor basketball courts.

The Ravens and the Boys & Girls Club will partner with the city’s Recreation and Parks department, Green Street Academy and LEVEL82 — a nonprofit founded by former Ravens and University of Maryland wide receiver Torrey Smith and his wife Chanel — to complete the renovation and operate the center, which will serve hundreds of children ages 6 to 18.

Baltimore Mayor Brandon Scott applauded the undertaking — only the third such collaboration between an NFL organization and a Boys & Girls Club.

“As I always say, ‘Here, we have sports teams that are of our city, not just in our city,’” Scott said. “This type of investment shows that the Ravens don’t just run on the field. They bring that Super Bowl-bred pedigree to their investments into the community where ‘The Flock’ lives and are committed to seeing the youngest members of ‘The Flock’ have every opportunity to win in the game of life.”

Former Ravens president Dick Cass said the club’s interest in the Hilton Recreation Center began in June 2020 shortly after he was asked by Bisciotti to find a local initiative to support. Cass said the center was selected after an in-depth search with Heather Darney, the franchise’s vice president of community relations.

Cass noted that the relationship grew when the Smiths and former Mt. Hebron High School and NFL linebacker Aaron Maybin began running programs there in the summer of 2021. The Ravens followed up by investing $400,000 to upgrade the current building’s windows, flooring and lighting.

Cass pointed out that the decision to include the organization in the facility’s new name is significant.

“We’ve never put our name on anything in the city, but this is the kind of project we want to put our name on,” he said. “And the fact that our name is on it means that we are fully committed. Nothing we are going to do is going to be anything other than an outstanding job. So whatever this facility needs to be a first-class, first-rate Boys & Girls Club as well as a facility to be used by Green Street Academy, we will do it.”

Smith, who joked that he felt like Scott as he canvassed the Allendale and Carroll neighborhoods to get a sense of their needs, credited the residents with joining the larger partners in developing this vision.

“We’re not coming in with superhero capes. The Ravens haven’t come in feeling like they’re Superman,” he said. “It’s been the community together.”

Pamela Green, president of the Carrollton Manor Neighborhood Improvement Association, said she has witnessed youth blossom in programs running in the current building. She said children who were introverts have become extroverts, and children who initially dragged their feet about participating at the recreation center have beseeched her to go back again.

Green said the new center can help reinvigorate the surrounding communities and, in turn, Baltimore.

Cass said he hopes the new center will be open by September 2024. He also said the Ravens wish to raise another $10 million for enough operating funds to keep the facility running for another 10 years after the re-opening.

That, new team president Sashi Brown said, is a sign of the club’s relationship with the West Baltimore community.

“We will continue to be here,” he said. “We are honored to be a part of this community for decades to come.”