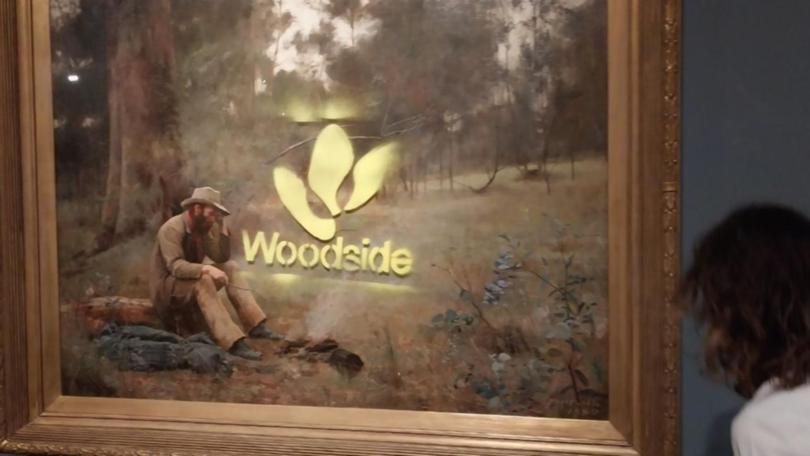 A 134-year-old piece of Australian art history has been defaced in a protest against one of the nation’s largest energy companies.

Frederick McCubbin’s ‘Down on His Luck’ was targeted by two protesters at the Art Gallery of Western Australia on Thursday.

Ceramic artist and illustrator Joana Partyka held a stencil over the canvas and sprayed the logo of Woodside Energy in yellow over the 1889 oil painting.

The gallery says the painting was covered by perspex acrylic and was undamaged in the incident.

Ballardong Noongar man Desmond Blurton also unfurled an Aboriginal flag on the floor of the gallery, while Ms Partyka glued her hand to a wall.

A WA Police spokesperson said officers arrested a 37-year-old woman at the scene.

She is assisting police with their inquiries.

The Burrup Hub project aims to link the Scarborough gas field, northwest of Exmouth on the coast of WA’s Pilbara region, to its onshore Pluto LNG processing plant via a 430km pipeline.

Activists are concerned the project will pollute the region, generate an extreme amount of emissions and risk damaging the heritage-listed Murujuga rock art on the Burrup Peninsula, after which the Hub is named.

In a statement, Ms Partyka claimed the Burrup Hub will emit six billion tons of carbon dioxide by 2070.

Mr Blurton has demanded no more industry on the Peninsula.