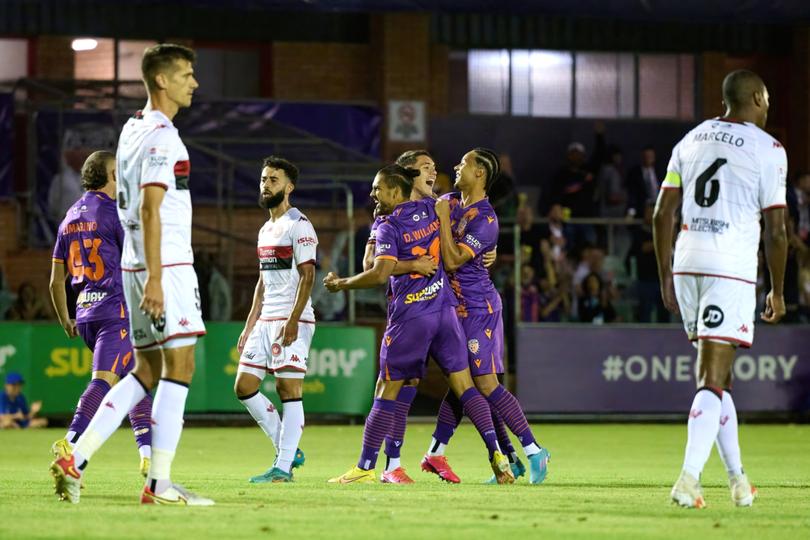 After swapping an Indian summer for the Indian Ocean this season, Perth Glory forward David Williams could not have asked for a happier homecoming.

The 34 year-old pulled up stumps on the sub-continent following three gruelling years away from Australia during the COVID-19 pandemic.

And Perth has proved a happy hunting ground so far. With two goals this season Williams said he was reaping the rewards of a return to Australia and loving his time in Perth.

The forward has played almost 200 A-League Men games for five different clubs in the past 15 years and said the move to the Glory was just the tonic after a productive but taxing time in the Indian Super League.

“It was very difficult, mentally and physically, because we were in a very strict bubble, doing COVID tests twice a day sometimes, with minimal training,” he said.

“Sometimes we weren’t allowed to train for four days, have to train two days before a game and then were expected to go out and be fit and play hard.

“It was very difficult being away from family as well, and why I decided to come back to Australia and try my luck here.

“I had to put things first in in my life, which is me and my wife and kids and I’m very happy where I am at the moment.”

Both of Williams’ goals this season have come at Macedonia Park, and he said he was enjoying playing in such close proximity to fans.

“The crowd’s right there at the fence, they’re quite loud for only having 4000 people at the game, so it is nice to be with them,” he said.

“Of course we’d love a big stadium playing at HBF but again, but that’s the cards we’ve been dealt, so we’re going to use it to the best we can.”

With former Glory coach Tony Popovic at the helm of this week’s visitors Melbourne Victory and six ex-Perth players in the Victory squad travelling west – including Bruno Fornaroli, who left the club in controversial style earlier this season – Saturday night’s clash looms as a blockbuster.

Williams, who scored the last-gasp equaliser to secure a point for Perth against Sydney last Saturday, said he had a lot of respect for Popovic and the Victory, but his teammates were focusing their energy internally, rather than externally.

“He drills into their players their way of playing and they have a very good mentality,” he said.

“They’re a big club, but we’re ready, at home. It doesn’t matter what coach is coaching on the other side, which players we have, we’ve just got to concentrate on our roles and defensively do the work.”

One former Glory attacker who may miss the Macedonia Park clash is Nick D’Agostino, who is reportedly on the cusp of a move to Norwegian club Viking FK, although Popovic has named him in the squad travelling to Perth.