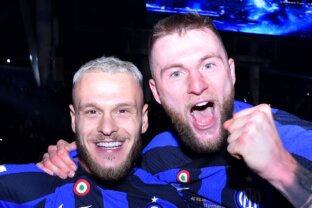 With the transfer window still open in Europe, PSG continues in search of possible reinforcements for the next seasons. Skriniar, defender of Inter Milan, has not yet resolved his situation with the Italian club and, without renewal, he may be free on the market.

According to information recently released by Sky Sports, the Slovakian defender does not wish to renew his contract with Inter Milan, with his agent, Roberto Sistici, having made that clear to the Italian team.

The various proposals made by the Italians were rejected by him and the Slovak would have asked for time to make a decision about his future.

Aware of Skriniar’s situation, the defender became the team’s priority. PSG in this transfer window. The club tried to buy the player from Inter Milan, however, the very high request of the defender’s current team caused the negotiation to be paralyzed. According to the information, the Italians had asked for 80 million euros, with the Slovak only having a few months left on his current contract.

While Skriniar may be the French club’s new signing this season, another may be making his farewell. Defender Sergio Ramos has a contract until the month of June of this year and, still without confirmation of renewal, he may end up leaving the team.

At the same time, there are also no guarantees about the future of the other starting defender of the team, Kimpembe, he has a contract with PSG until 2024 and a renewal has not yet been signed.