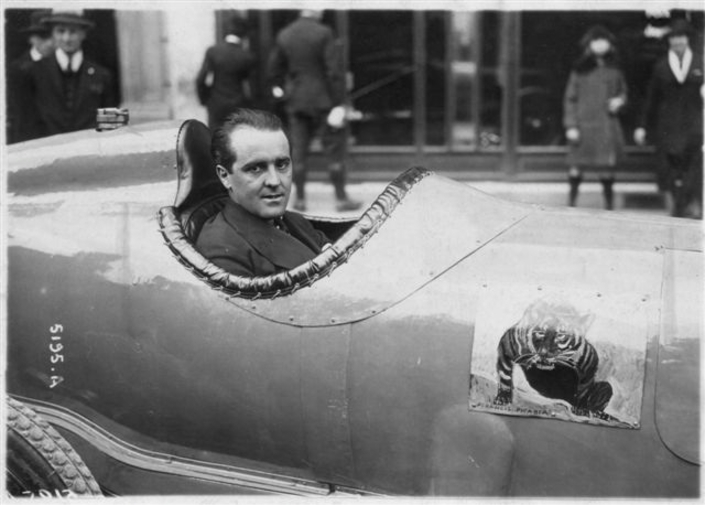 In 1923, Bugatti decided to try his luck with five cars which were entered by their drivers. The Type 30s are equipped with a tapered, blue body, which was designed by Louis Béchereau, an aerodynamicist who works for the aeronautical firm Spad.

At the 1923 ACF Grand Prix, Bugatti entered the tank, a car with a fully enveloping body, but at Indianapolis it was a more classic model with the wheels in the open air.

For the first time, we see the sketch of the radiator in the shape of a horseshoe, although it is dressed in profiling.

Despite this attractive form, the Bugatti’s result was not brilliant at Indianapolis, with only one car at the finish of a race won by a Miller…

But history will remember above all that the Bugatti of Pierre de Vizcaya was characterized by a particularity more exciting than any sporting result: a tiger painted by Francis Picabia. It is without doubt the first time in history that an automobile lends its side, in the literal sense, to a work of art.

Francis Picabia is particularly sensitive to the automobile. Personally, he circulates in thoroughbreds. In New York, he uses a Mercer while in Europe he is found driving a Delage. His friend, the photographer Man Ray has also captured some shots of the painter at the controls of his high-speed cars.

In the painting of the master of Dadaism, mechanics is omnipresent. For the Dada movement, the machine is an agent of derision and destruction, a support for fantasies that stigmatizes all human activities. When he paints the portrait of Marie Laurencin, Francis Picabia paints a fan. the portrait of a young american girl in a state of nudity is a spark plug. Gabrielle Buffet takes on the features of a windshield. The carburetor child consists of pulleys, springs and screw threads. !

Picabia remembers furtive visions of a road angle illuminated, for a fraction of a second, by the beam of light from the headlights. A night road, of course.