Nicola explains how the debt with Daniel Alves is after prison 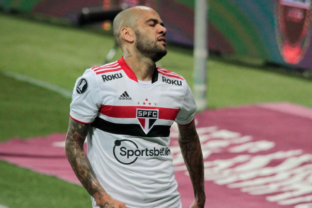 Present at the last World Cup for the Brazilian national team, right-back Daniel Alves was arrested this Friday in Barcelona, ​​Spain, after being accused of sexual assault. The arrest order was carried out and the athlete was taken to the city’s penitentiary center.

With the preventive detention of Daniel Alves, many rumors began to emerge on social networks about the debt involving the 39-year-old player with São Paulo. Some fans questioned whether the right-back’s arrest would “annul” the payment of installments involving the player’s termination with Tricolor Paulista.

With this scenario, journalist Jorge Nicola used his “Twitter” to explain the situation. After contacting the São Paulo leadership, the former ESPN clarified the fans’ doubts and stated that the club does not have legal support to cancel the debt payment.

“São Paulo claims that there is no legal support to break Daniel Alves payments after his arrest in Spain, not least because the side has no employment relationship with Tricolor. Debt only ends in four more years and Daniel pockets BRL 472,000 monthly,” wrote Nicola.

The arrest of Daniel Alves caused his current club, Pumas, from Mexico, to terminate his contract immediately. The 39-year-old denies all allegations and his defense is expected to appeal the arrest warrant in Spain.

After the termination of the contract involving Daniel Alves and São Paulo at the end of 2021, the club and the player made a millionaire debt agreement. The right-back accepted Tricolor’s proposal to receive salaries in 60 installments of 472,000 monthly over five years, amounting to approximately R$ 25 million.

Announced as the team’s main reinforcement in August 2019 with the number 10 shirt and everything, Daniel Alves and São Paulo did not have a love affair. Even though the right-back won the Paulista Championship in 2021, the veteran player accumulated bad performances, controversy and some injuries that prevented a good relationship with the fans.

With the shirt of São Paulo, Daniel Alves played for 95 matches, scoring 10 goals, in addition to 14 assists. The player stayed at Tricolor Paulista between August 2019 and November 2021.