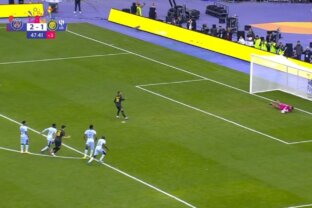 After providing a beautiful assist for Messi to open the scoring, Neymar had the chance to score in PSG x Riyadh All-Stars. Hit in the penalty area, the star took responsibility for taking the maximum penalty signaled by the referee. However, even with great efficiency at the whitewash mark, the number 10 failed in the shot, which was saved by goalkeeper Mohammed Al-Owais.

Waiting until the last moment to move, the goalkeeper of Cristiano Ronaldo’s team didn’t even give a rebound. Thus, Neymar had to deal with a rare frustration after taking a penalty, while the local fans cheered with the defense.

MY GOD IN HEAVEN, THE IMPOSSIBLE HAPPENED

Accustomed to moving goalkeepers around when he is assigned to take penalties PSG and the Brazilian national team, Neymar waits until the last moment to shoot. As a result, Al-Owais’ defense caused a reaction of disbelief on the internet and the bid soon reached the most talked about topics on Twitter.

It was slow huh 😒

LADIES AND GENTLEMEN, THIS IS NOT A NORMAL DAY!

They told me he never makes a mistake, I don’t believe in football anymore.

the world is no longer the same

I thought I would never see this, they threw zika on him

Goalkeeper was already naughty with him, smart he was

The goalkeeper was very smart
Only moved in the last movement

Neymar takes the penalty waiting for the goalkeeper to fall first, this one didn’t do that and he lost

It’s explained why he didn’t take the World Cup penalty.

Near Perpignan. The spectacular rescue of a young biker who fell into a ravine