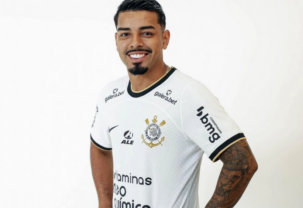 the match between Corinthians x Água Santa on Wednesday night (18), at 7:30 pm, marked the debut of left-back Matheus Bidu for the alvinegra team. After the 3-0 victory, the athlete evaluated his performance on the field and said he felt “nervous” when coach Fernando Lázaro called.

“There’s a nervousness there, but I believe that in the next games I can let go more. I’ve been working on improving some things. I’m happy for the support from the crowd and I think that’s it, the game was safe and very calm for a first impression”, declared the new Timão player in the mixed zone.

Matheus Bidu also took advantage of the space to thank the supporters of Corinthians. When he was called in the final stage of the second half of the match, the more than 37,972 Corinthians fans present in Itaquera applauded the entry into the field of side.

“It was a wonderful debut. Debuting at home is always good, with a win too. The first three points we won in the championship. I am very happy with the welcome from the crowd. I think it will be an unforgettable night that I will take with me for the rest of my life”, declared the left-back of the Corinthians.

During the interview, lateral Bidu continued praising the club and fans. He commented on his happiness at being on a team that fights for titles and highlighted the good reputation of the crowd from Corinthians.

With Matheus Bidu among those possibly related, Timão returns to the field on Saturday against Inter de Limeira, at 6:30 pm, at Estádio Major José Levy Sobrinho, in Limeira, for the third round of the group stage of the Campeonato Paulista.