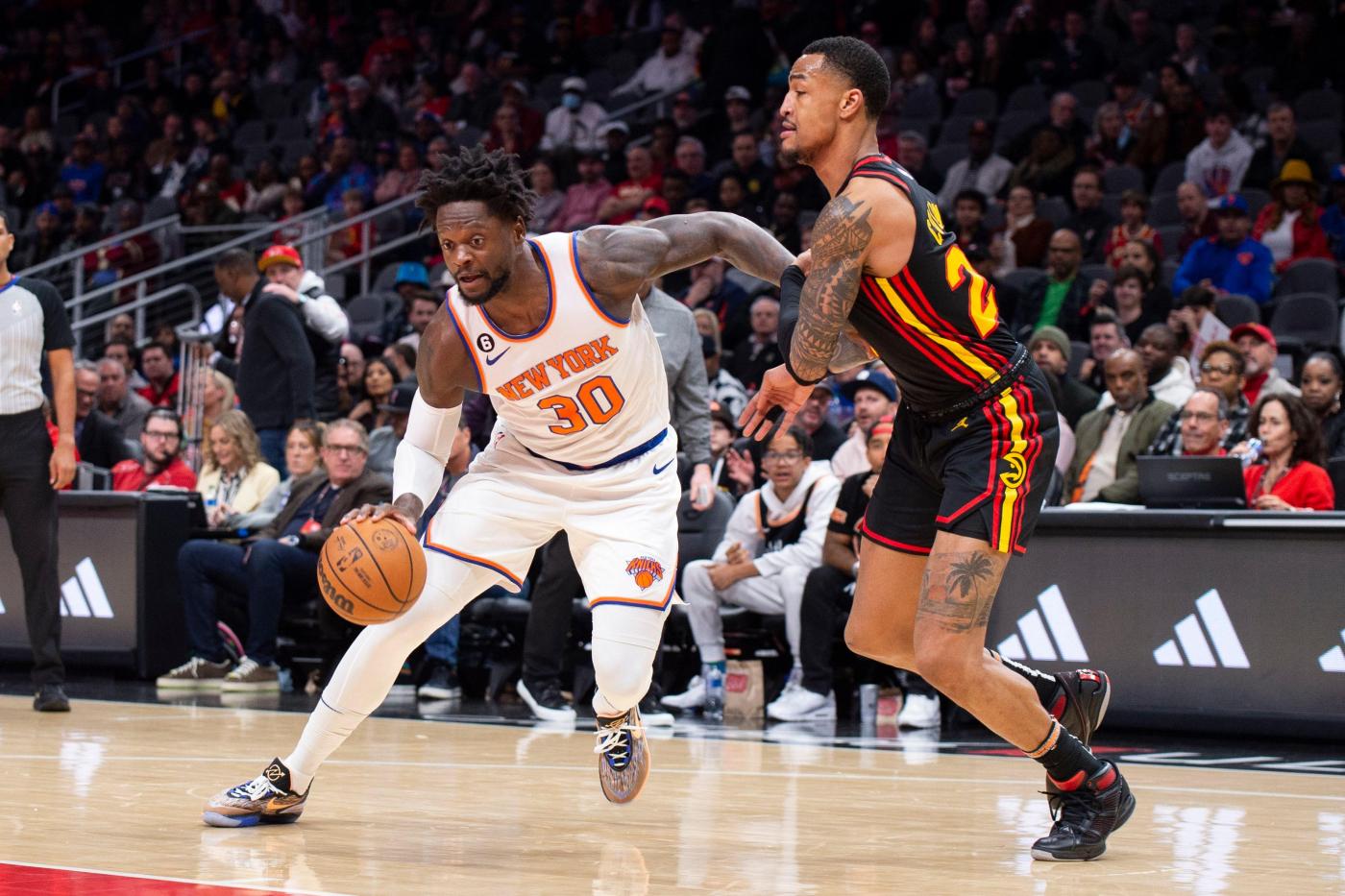 ATLANTA — Defense without Mitchell Robinson didn’t start so well for the Knicks. In fact, it was a disaster.

With Robinson missing his first game of many to recover from a surgically-repaired thumb, Tom Thibodeau’s squad found itself taking the ball out of its own net. Over and over again.

The Hawks feasted in the pick-and-roll and inside the paint, riding big nights from Dejounte Murray and Trae Young in a 139-124 victory Friday night.

The Knicks (25-22), who’ve lost three straight, kept it close until the fourth quarter mostly because of their hot shooting and Julius Randle (32 points). But then their offense predictably fell back down to earth, and the Hawks (24-22) pounced for their fifth straight victory.

Thibodeau clearly missed his defensive anchor. In Robinson’s absence, the coach opted to start Jericho Sims instead of Isaiah Hartenstein.

It was the third start of the season for Sims, a 2021 second-round pick, who has floated in and out of the rotation this season. Sims, like Robinson, is a high-flying rim protector. But he’s smaller than Robinson and less experienced. Even though Sims played well Friday night, the Knicks were vulnerable in their drop pick-and-roll coverage and especially suffered when Sims subbed out.

The Hawks scored 62 points in the paint and grabbed 14 offensive rebounds. They moved within 1 ½ games of the Knicks for seventh in the Eastern Conference.

“We don’t have to change [with Robinson being out],” Thibodeau said before tipoff. “Jericho and Isaiah have been in the rotation and that was one of the things that stood out when we were acquiring those guys was the rim protection. We felt both were capable. That’s an important part of today’s NBA. What Jericho gives you is a little more versatility with his feet. Isaiah, the look is different because it opens up the floor and pulls people away from the basket offensively.”

The Hawks have flirted with disaster this season, with coach Nate McMillan rumored to be contemplating retirement midway through the season. But they also entered Friday night playing rejuvenated basketball with a fully healthy roster.

And the Hawks are pretty stacked when healthy. They have two potential All-Stars in Young and Murray, who combined for 56 points Friday, plus B-level role players in John Collins, Bogdan Bogdanovic, Clint Capela and DeAndre Hunter.

The Knicks got 23 points from RJ Barrett and 19 from Jalen Brunson but couldn’t get stops.