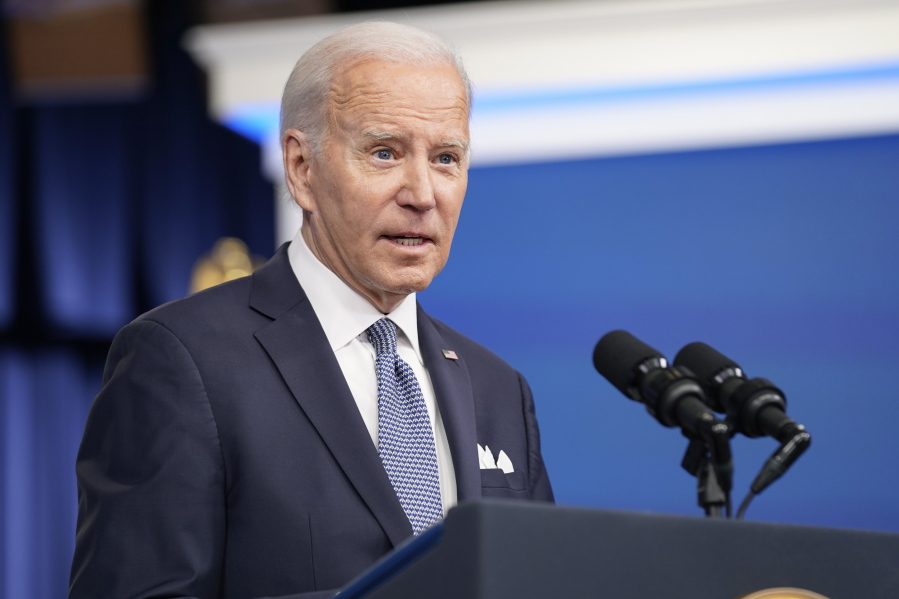 WASHINGTON (AP) — When Hillary Clinton was running for president, her campaign wanted a gentler way to talk about the criminal investigation into her private email server, so they called it a “security review.”

Now President Joe Biden’s team is using similar language when talking about the discovery of classified documents in his Delaware home and former office. Karine Jean-Pierre, the White House press secretary, tends to describe the situation as a “review” or a “legal process,” using the term “investigation” much less frequently.

Any White House or campaign tends to choose its words carefully, but never moreso than when under a prosecutor’s scrutiny. It’s a rhetorical dance where political figures weigh demands for full disclosure against the political imperative to cast investigations in the least ominous light — not to mention the desire to avoid potential criminal charges.

“Between the media and political concerns of protecting a president by being transparent, and the legal concerns of not speaking when you don’t know everything, there’s got to be a balance,” said Lanny Davis, who served as a legal adviser to then-President Bill Clinton as he faced investigations from independent counsel Ken Starr.

Ian Sams, a spokesperson for the White House counsel’s office, acknowledged that tug of war when speaking off-camera to reporters this week — a conversation in which he didn’t shy away from using the word “investigation” repeatedly.

“I understand that there’s a tension between protecting and safeguarding the integrity of an ongoing investigation with providing information publicly appropriate with that,” he said.

Biden’s team has faced criticism for its fragmented disclosures about the discoveries of classified documents, occasionally leading to heated exchanges between reporters and Jean-Pierre in the White House briefing room.

She ran into trouble when she suggested last Friday that all documents had been recovered, only to have an additional discovery disclosed over the weekend.

“Are you upset that you came out to this podium on Friday with incomplete and inaccurate information?” one reporter asked Jean-Pierre on Tuesday. “And are you concerned that it affects your credibility up here?”

Jean-Pierre responded by saying that “what I’m concerned about is making sure that we do not politically interfere in the Department of Justice,” describing the situation as an “ongoing process.”

Earlier in the briefing, Jean-Pierre said she was trying to be “prudent” with what information she shares.

There’s a long history of administrations deflecting about ongoing probes. Scott McClellan, who represented President George W. Bush’s White House, and Mike McCurry, who did the same for President Bill Clinton, frequently punted questions elsewhere rather than provide their own commentary.

Davis also said he doesn’t blame the White House for favoring some words over others.

“You use the word ‘review’ instead of ‘investigation.’ I’ve done it hundreds of times on behalf of clients,” he said. “Why do I not use the word ‘investigate?’ Because it’s harsher. It’s an understandable choice to use a softer word.”

Attorney General Merrick Garland last week appointed a special counsel to lead the investigation, a decision that could leave a lingering cloud over the White House as Biden prepares a potential reelection campaign.

Richard Sauber, a lawyer for the president, has not used the word “investigation” in any of his written statements about the case, but he’s stressed the White House’s willingness to cooperate with the Justice Department. He said Thursday: “We are confident that a thorough review will show that these documents were inadvertently misplaced, and the president and his lawyers acted promptly upon discovery of this mistake.”

There’s no single playbook for how to speak about a criminal investigation that reaches into the White House or touches one of its aspirants.

Former President Donald Trump, for instance, spewed vitriol at the FBI and special counsel Robert Mueller during an investigation into whether his 2016 campaign coordinated with Russia, repeatedly deriding it as a “witch hunt” and claiming, falsely, that it was led by “angry Democrats.” Bill Clinton’s personal lawyer, David Kendall, blasted Starr for leaks and an “overkill” in his investigation during House impeachment proceedings in 1999.

In some instances, the White House has disclosed or confirmed information about an ongoing criminal probe that a defense lawyer in a lower-profile probe might be less inclined to do. That’s what happened in 2004 when the White House acknowledged to the media that President Bush had been interviewed by investigators as part of a special counsel probe into the leak of the covert identity of CIA officer Valerie Plame one year earlier.

“The leaking of classified information is a very serious matter,” McClellan, then White House press secretary, said at the time. “No one wants to get to the bottom of this matter more than the president of the United States.”

When it comes to handling legal matters involving the White House, it’s “a little more intense — its concerns are a little bit broader than a corporation. It adds a different level of concern,” said Bill Jeffress, a veteran Washington attorney who represented former Bush administration official I. Lewis “Scooter” Libby, who was convicted of lying to investigators and obstruction of justice in the Plame leak probe.

Hillary Clinton came under an FBI investigation in 2015 for her use of a private email server as secretary of state. Dogged by questions on the campaign trail about the probe, she and campaign officials took to calling it a “security review” or “security inquiry.” That branding, a seeming attempt to minimize a criminal investigation, drew a mild chiding in 2016 from then-FBI Director James Comey, who said he was unfamiliar with that terminology.

“I don’t know what that means,” Comey told reporters when asked about the “security inquiry” language. “We’re conducting an investigation. That’s the Bureau’s business, that’s what we do. That’s probably all I can say about it.”

In the Biden case, the White House has faced criticism for waiting two months to disclose that the president’s lawyers had located some documents with classified markings in a locked closet at the Penn Biden Center in Washington. Officials did not reveal until several days later that even more documents had also been located, this time in Biden’s home in Wilmington, Delaware.

Jean-Pierre rejected suggestions that the White House had not been transparent. Even though the public wasn’t informed, she said, the Justice Department and National Archives had been notified.

“I want to say that we have been transparent here,” she said last week. “That is why the minute that his lawyers found those documents, they reported it.”

It’s unclear if anyone might face criminal charges or if prosecutors can establish that anyone willfully broke the law — a high legal standard. Biden has said he was surprised by the discovery of the documents. And in any event, the Justice Department has long held that a sitting president cannot be indicted.

Regardless, questions about the investigation — or the review or the legal process — will not be going away anytime soon.