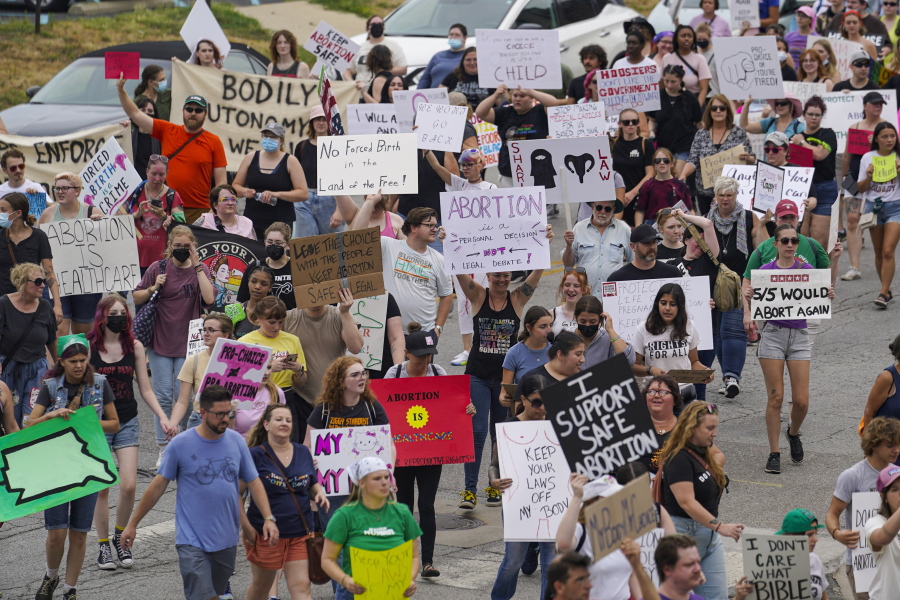 INDIANAPOLIS (AP) — The fate of Indiana’s Republican-backed abortion ban on Thursday goes before the state Supreme Court as it hears arguments on whether it violates privacy protections under the state constitution.

Abortions have been allowed to continue in the state since a county judge blocked the law from being enforced in September, a week after the law approved in August had taken effect.

The arguments being made before the Indiana justices come after the top courts in two other conservative states split this month on similar state constitutional challenges to their abortion bans, with South Carolina’s ban being struck down and Idaho’s being upheld in the latest examples of the patchwork of state laws now in place.

The Indiana ban, which eliminated the licenses for all abortion clinics in the state, includes exceptions allowing abortions at hospitals in cases of rape and incest, before 10 weeks post-fertilization; to protect the life and physical health of the mother; and if a fetus is diagnosed with a lethal anomaly.

Owen County Judge Kelsey Hanlon, a Republican, blocked the Indiana ban from being enforced in the lawsuit filed by abortion clinic operators, writing that “there is reasonable likelihood that this significant restriction of personal autonomy offends the liberty guarantees of the Indiana Constitution” and that the clinics could prevail in the legal challenge.

The five-member Supreme Court, all of whom were appointed by Republican governors, is scheduled to hear arguments Thursday morning from the state attorney general’s office and the American Civil Liberties Union of Indiana, which is representing Planned Parenthood and other abortion clinic operators challenging the ban.

The court faces no deadline for releasing a decision and typically takes several weeks or longer before doing so in cases it hears.

The state attorney general’s office has argued that Indiana had laws against abortion when its current constitution was drafted in 1851 and that the judge’s ruling wrongly created an abortion right.

Court orders have allowed abortions to continue under previous Indiana laws generally prohibiting abortions after the 20th week of pregnancy and tightly restricting it after the 13th week.

The ACLU said the clinics were not arguing that the state could not regulate abortion at all, but believed the ban violated “the core constitutional rights of privacy and bodily autonomy.”

“Under (the ban’s) extremely narrow exceptions, only a tiny fraction of Hoosiers can access vital healthcare and only if they have suffered rape, incest, or certain severe medical threats,” ACLU attorneys said in a court filing. “Even then, myriad logistical hurdles would prevent eligible Hoosiers from obtaining abortions.”

The question of whether the Indiana constitution protects abortion rights is undecided. A state appeals court ruled in 2004 that privacy is a core value under the state constitution that extends to all residents, including women seeking an abortion.

But the Indiana Supreme Court later upheld a law requiring an 18-hour waiting period before a woman could get an abortion without addressing whether the state constitution included the right to privacy or abortion.