Grêmio has casualties against Caxias in the debut of Gauchão; see the names 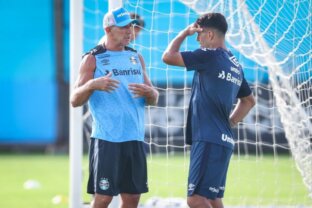 This Saturday (21), Grêmio visits Caxias, in the debut of the 2023 Gaucho Championship, at Centenary. Current champion, Imortal is looking for the sixth consecutive championship. The confrontation between the teams from Rio Grande do Sul is scheduled for 16:30h.

At first, the Tricolor arrives packaged after an undeniable victory in the Recopa Gaúcha. Counting on a spectacular first half by Luis Suárez, the Gremistas beat São Luiz-RS by 4×1, with three goals from the striker. The Uruguayan should even make his debut in the state with four other athletes. The defenders, Bruno Uvini and Fábio, even though they are Brazilian, did not play in the competitions at the beginning of the year. Likewise, Carballo and Cristaldo, the latter still with pending issues involving the former club.

In this way, Renato Portaluppi continues with important casualties at the beginning of the season. Defenders Pedro Geromel and Natã, and midfielders Lucas Leiva, Villasanti and Jhonata Robert also do not enter the field against Caxias. While striker Diego Souza, today a substitute for ‘Luisito’, was expected to debut for Gauchão, however, he ended up not traveling. On the other hand, goalkeeper Gabriel Granado was again listed.

In short, without counting on some important players, Grêmio can repeat practically the entire lineup of Recopa. In defence, Bruno Alves forms a partnership with Argentine veteran Walter Kannemann. While the doubt remains in relation to the midfield, Thiago Santos and Lucas Silva compete for Villasanti’s vacancy.