Grêmio has a last-minute drop before their debut at Gauchão 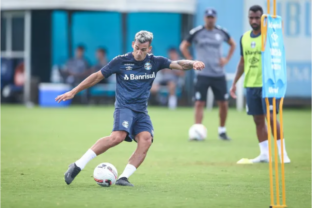 Grêmio ended its preparation to face Caxias in a match that will be held this Saturday (21), at 4:30 pm (Brasília time), at Estádio Centenário, in Caxias do Sul-RS. The confrontation is valid for the first round of the Gaucho Championship.

At the last minute, Grêmio lost an important part of its squad for the confrontation against Caxias. Argentine midfielder Franco Cristaldo was cut from the match due to a debt between Tricolor Gaúcho and Huracán, his former club in Argentina. The player was on the bus ready to travel with the delegation towards Caxias do Sul-RS, when it was announced that he was cut from the game.

With this imbroglio involving Grêmio and Huracán, Franco Cristaldo was not enrolled in time for the Gaúcha Football Federation, which made his debut for Imortal impossible. The board of directors of the Tricolor Gaucho was optimistic for a positive outcome until 7 pm this Friday (20), which was the deadline for registration for the first round of the State.

Therefore, the midfielder is the only Grêmio reinforcement that has not been regularized. Cristaldo had trained among the starters, and was a sure name in coach Renato Portaluppi’s initial team. With the absence of the Argentine, the place in the team is between midfielders Pepê and Bitello.

Champion of the Recopa Gaúcha last Tuesday, Grêmio starts the search for the sixth championship followed by the Gaúcho Championship. After the match against Caxias, Tricolor receives Brasil de Pelotas in their first home match for the competition.