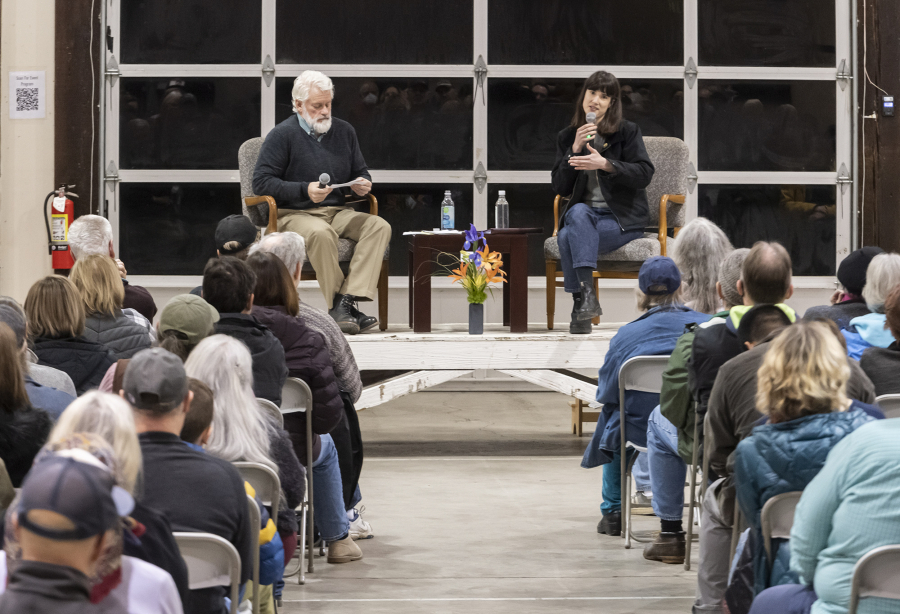 STEVENSON — To most, commuting from Washington, D.C., to the western Columbia River Gorge might feel like moving between two worlds.

“I’m just so glad to be here with you all. You guys have no idea how good it is to get back on a gravel road after leaving,” Perez, D-Skamania, said at the end of the event. “I was sad at how the trees are there [in D.C.].”

Only a dozen days after being sworn in at the U.S. Capitol and following a dozen years without a similar in-person events, Perez held her first town hall in Stevenson, answering written questions submitted by individuals in the crowded exhibit hall.

Though the topic of discussion vastly ranged from hot-button issues including abortion and gun control to local challenges such as salmon and steelhead recovery, Perez’s main point was clear: She sees herself as a member of the working-class and an advocate for her working-class community who is unafraid to cross partisan lines to get things done.

“When I see bills that make sense for our community, I’m going to get behind it and ensure that we are actually doing the work of legislating,” she said. “I’m responsible to you all. I’m here doing in-person town halls because I think that’s what good governance looks like when you are accountable.”

Perez made her moderate approach clear on Jan. 11 when she was one of only three Democrats to vote yes on a bill condemning physical attacks “on pro-life facilities, groups, and churches.”

As an owner of an auto-repair shop in Portland, Perez’s platform emphasizes giving power back to the working class, whether through funding of apprenticeship and trade school programs or supporting right-to-repair laws, which she said benefit farmers and other blue-collar industries in Southwest Washington.

“I don’t necessarily agree with her on everything, but I think that her willingness to listen to everyone is genuine, and that she embraces other people’s opinions,” said Betty Cooper, a Washougal resident at the town hall. “I’m excited to be part of the district. I support her because she is so genuine, and she’s unique in Congress, and she’s making the 3rd District become a national news item.”

Perez made national headlines after narrowly beating Republican candidate Joe Kent in November’s election. In doing so, she became the first Democrat to represent Washington’s 3rd Congressional District — a Republican-leaning area — in 12 years.

While in D.C., Perez worked to pass multiple bills, including one to remove tariffs by India on Washington state apples, and another to prevent members of Congress or their families from trading individual stocks.

As Congress continues forming House committees, Perez said she expressed her interest for the agriculture and small business committees, which she said will likely be announced next week.

By representing an area so dependent on manufacturing, agriculture and forest products, Perez says she hopes that the 3rd District can be a leader in terms of renewable energy and transportation for rural areas through investments in local manufacturers to reduce outsourced pollution.

“I want to be really careful in the way that we spend these green development dollars, that we’re not just selling ourselves short and supporting assembly plants when we should be investing in actual manufacturing with millwrights and skilled labor and actual market power,” Perez said.

This emphasis on domestic manufacturing was one of many references to Perez’s urge to give power back to middle-class America, which did not fall on deaf ears in the barn-like exhibit hall.

“I think she’s going to be an excellent representative for us,” said Joe Kear, a local resident who has known Perez since she moved to the area. “She’s someone who’s like a lot of this district. A lot of this district is rural and the communities are in rural areas. So I feel like she’s really one of us and the right kind of person to represent us.”

Perez said in an interview with The Columbian following the event that she left with a renewned sense of urgency and responsibility to serve her region.

She also plans on scheduling regular town halls throughout the district, which will be announced in the near future.

“I’m relieved, I’m excited, I’m really proud of my community,” Perez said. “This was such a substantive conversation. When you’re at home reading Facebook or social media, the narrative is not, ‘look at these people with varying political beliefs and issues that are important to them coming together.’ It was just really refreshing to see that we can break the mold, we can have these conversations, we can be accountable to each other.”