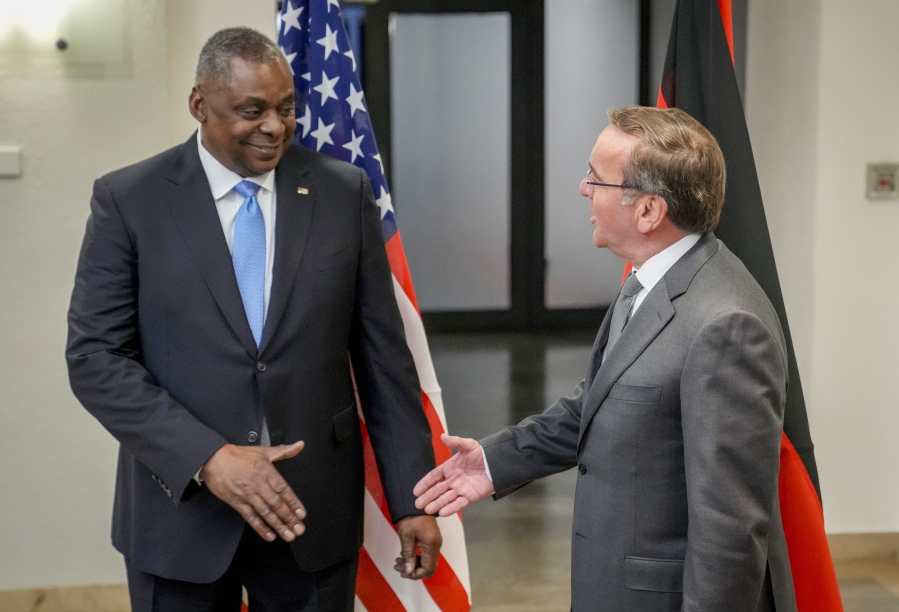 Since the U.K. announced last week that it will send Challenger 2 tanks, Berlin has faced increasing calls to supply Leopard 2 tanks or at least clear the way for others, such as Poland, to deliver German-made Leopards from their own stock.

Germany’s new defense minister, Boris Pistorius, left open whether that will happen and under what conditions after meeting U.S. Defense Secretary Lloyd Austin on his first day in office.

He told ARD television he was “pretty sure we will get a decision on this in the coming days, but I can’t yet tell you today how it will look.”

Austin will host a regular coordination meeting of Ukraine’s Western allies at the United States’ Ramstein Air Base in Germany Friday.

Speaking by video link on the sidelines of the World Economic Forum’s annual meeting in Davos, Switzerland, Zelenskyy offered a veiled critique of major supporters such as Germany and the U.S. that have nonetheless hesitated about sending tanks.

He bemoaned a “lack of specific weaponry.” Speaking through an interpreter, he said: “There are times where we shouldn’t hesitate or we shouldn’t compare when someone says, ‘I will give tanks if someone else will also share his tanks.’”

Ukraine’s foreign and defense ministers said that the promised British tanks, while welcome, are “not sufficient to achieve operational goals.”

“We guarantee that we will use these weapons responsibly and exclusively for the purposes of protecting the territorial integrity of Ukraine within internationally recognized borders,” Dmytro Kuleba and Oleksii Reznikov said in a statement, appealing to Germany and several other countries that use the Leopard 2 to join an “international tank coalition.”

For months, Ukraine has sought heavier vehicles such as the Leopard and U.S. Abrams tanks, but Western leaders have trodden carefully.

Germany has been particularly in focus recently. Critics, some inside Germany’s governing coalition, have long complained of Chancellor OIaf Scholz’s perceived hesitancy to take the next step when it comes to weapons deliveries.

Scholz has been wary of pressure, insisting that Germany wouldn’t go it alone and pointing to a need to ensure that NATO doesn’t become a party to the war with Russia, though every time so far Berlin has eventually moved ahead. He portrays his cautious weighing of each step as a virtue.

In Davos Wednesday, Scholz avoided directly answering a question about Leopards, saying Germany will remain one of Ukraine’s top weapons suppliers and that “we are never doing something just by ourselves, but together with others — especially the United States.”

German officials have conveyed their hesitancy to allow allies to give Leopards unless the U.S. also sends Ukraine the Abrams, according to a U.S. official who wasn’t authorized to comment and spoke on condition of anonymity.

Asked whether Germany would only deliver Leopards if Washington supplies the Abrams, Pistorius replied that he isn’t “aware of such a package.” But he insisted that aid must continue to be “coordinated” and it’s important for Germany to proceed “shoulder-to-shoulder with the Americans.”

An upcoming new package of U.S. military aid is expected to include nearly 100 Stryker combat vehicles and at least 50 Bradley armored vehicles — but not the Abrams, which U.S. officials say has complex maintenance needs and may not be the best fit.

“The maintenance and the high cost that it would take to maintain an Abrams — it just doesn’t make sense to provide that to the Ukrainians at this moment,” spokeswoman Sabrina Singh said at a Pentagon briefing Thursday.

Senior officials from Britain, Poland, the Baltic nations and other European countries met in Estonia on Thursday before the Ramstein gathering.

U.K. Defense Secretary Ben Wallace said his country would send at least three batteries of AS-90 artillery, armored vehicles, thousands of rounds of ammunition and 600 Brimstone missiles, as well as the squadron of Challenger 2 tanks.

Wallace told The Associated Press that the decision to send battle tanks was a “natural progression” of U.K. military support for Ukraine and was discussed with the U.S.

“If you’re going to donate armored personnel carriers, you need to complement that with tanks,” he said. “We had some tanks that we thought could do that.”

Wallace acknowledged that the Challenger shipment “is not the single magic ingredient” for Ukraine, which has said it needs 300 tanks, among other weapons, to expel Russian forces. But he voiced hope that it will complement Bradley armored vehicles the U.S. is already supplying and help “lead the way” for others to send tanks.

Elsewhere, Swedish Prime Minister Ulf Kristersson said his country has decided to send up to 50 Swedish-made combat vehicles plus a shoulder-fired anti-tank missile system and the Archer artillery system to Ukraine.