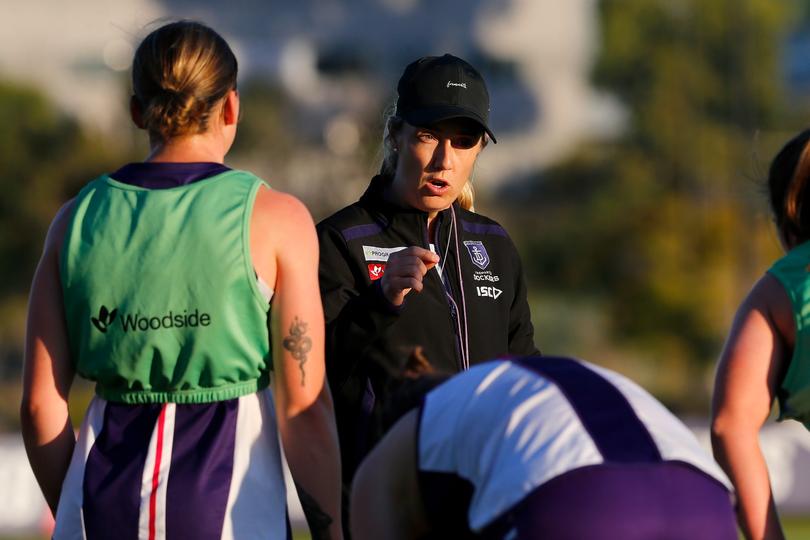 Fremantle’s AFL Women’s coach hunt is down to two including one who didn’t apply.

Six contenders were interviewed for the position last week, with four already told they haven’t got it.

Webb, who was an assistant at the Dockers for five years, is believed to have been approached by the club about the role and is yet to decide if she will take it.

She currently serves as the midfield coach of the Western Bulldogs, having followed her husband Marc to Victoria after he got the same job for the men’s team.

Webb is hesitant to take the role because it will mean splitting her family again, having done it for eight months when Marc was appointed at the Bulldogs.

The other applicant is believed to be a prominent female football figure in Western Australia.

Applications closed earlier this month for the Dockers’ AFLW head coach role, vacated by Cooper who led the club to four finals campaigns in five seasons before an injury-ravaged 2022 campaign.

The job advertisement was posted in mid-December on Seek, more than a month after they parted ways with Cooper.

Schwarze led the Tigers to a drought-breaking WAFLW flag last season, while Templeton coached the Sharks to an undefeated season the year before and a losing grand final in 2022.

A Fremantle spokeperson told The West Australian they were hoping to announce the successful applicant “within the next month”, but wouldn’t specify how many people and who are in the mix.

“The interview process is continuing and we’re hoping to finalise the process within the next month,” the spokesperson said.

It is understood Paxman is understood to be close to Dockers AFLW player development manager Claire Heffernan, who came to Fremantle with head of football operations and performance Bob Murphy.

It is not known if the instability around the coaching situation will affect five-time All-Australian Paxman’s decision.