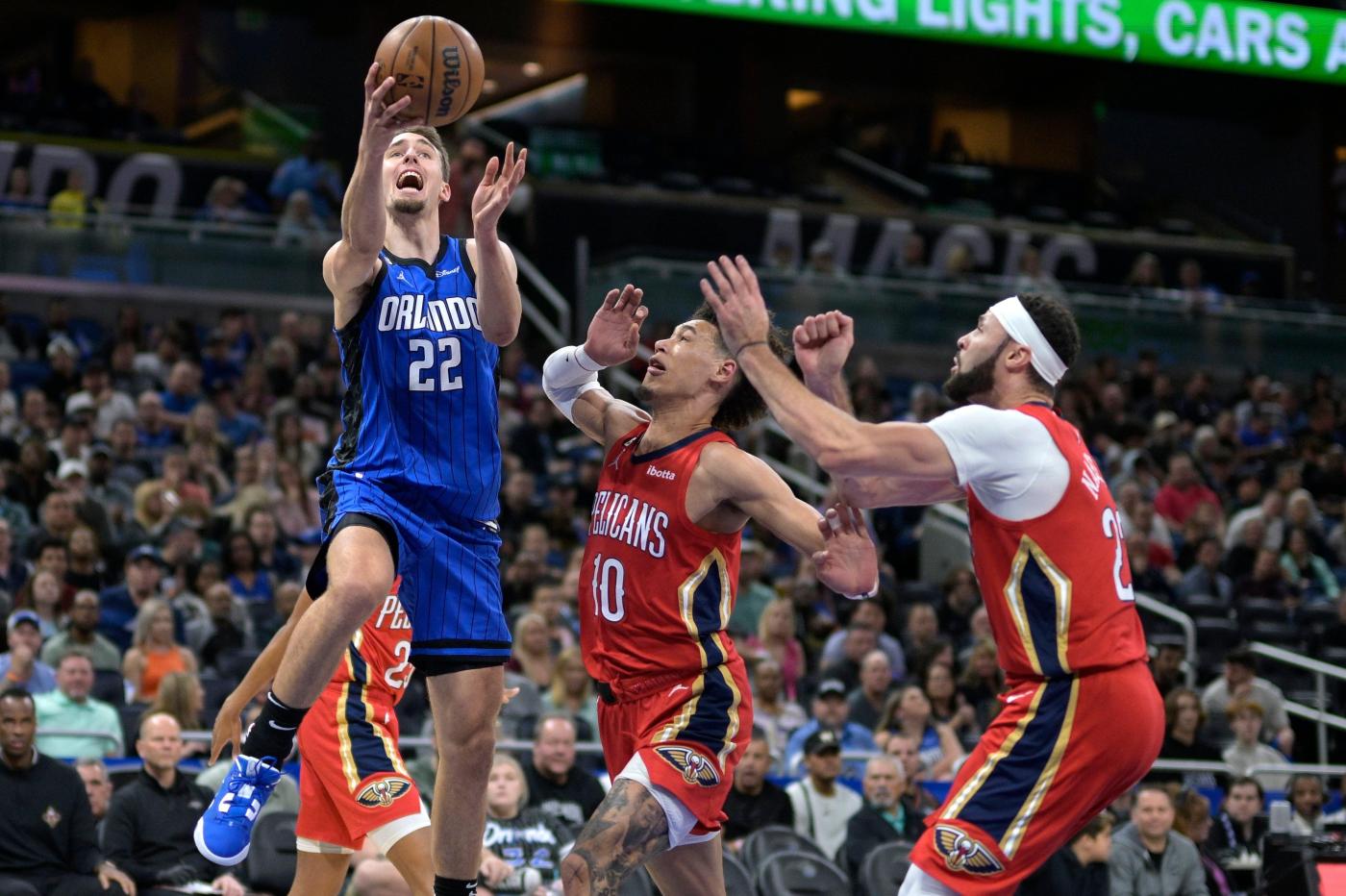 The Orlando Magic learned the hard way the importance of being locked in on the defensive glass during their West Coast trip.

It’s why they spent a significant amount of time improving at it throughout the week since getting back to Central Florida on Monday, especially during Wednesday’s practice ahead of Friday’s 123-110 home win over the New Orleans Pelicans.

Consider the lessons learned, with the Magic (17-28) holding the Pelicans (26-20) to 11 offensive rebounds for 14 second-chance points to help them pick up the victory.

“We’ve watched probably more clips and edits of when we do it right than we have in a long time,” coach Jamahl Mosley said pregame. “Our guys understand those are the details we’ll need to hit home on. We’ve got to make sure our guards come back and do a great job rebounding through those free-throw line areas so it allows us to start our break. We’ve got to finish possessions out.”

The Magic not only finished out defensive possessions strongly but they also closed out the game on a high note, outscoring the Pelicans 35-19 in the fourth.

Franz Wagner was available and started after entering Friday as questionable because of a sprained left ankle he suffered in Wednesday’s practice.

He led the Magic with 30 points (10-of-16 shooting, 5 of 7 on 3s), 9 assists and 6 rebounds. Wagner was part of the second unit that helped the Magic take control of the game in light of most of the starters struggling early.

Finishing out defensive possessions has been a strength for most of the season, but not lately — until Friday.

The Magic ranked 13th in defensive rebounding frequency (72.1%) and 14th in second-chance point allowed (13.5) on the season.

Not finishing possession was especially crucial in the losses to the Utah Jazz and the Denver Nuggets during the trip.

“We usually play a good 20-22 seconds of defense and it’s the rebound that messes it up for us,” big man Wendell Carter Jr. said. “We are one of the better defensive teams in this league. But we aren’t going to get that credit until we start finishing out possessions.”

Finishing out possessions on the boards was especially important against a Pelicans team that entered Friday ranked eighth in offensive rebounding frequency (30.1%) — even with Zion Williamson sidelined.

“It’s the same principles,” Mosley said. “It’s fundamental. Understanding when that shot goes up, you don’t watch the ball. You go find a man, get a hit and pursue the basketball. That’s a fundamental thing we’ve taught our guys.”

CJ McCollum had 23 points and 7 assists but on 6-of-21 shooting. Wagner limited him in the fourth with stifling man-to-man defense.

The Magic recalled Isaac from the team’s G League affiliate, the Lakeland Magic, Friday. They added in a statement that Isaac will remain on the inactive list due to return-to-competition reconditioning.

“He’s responded well,” Mosley said. “Overall, he’s just trying to find what he’s capable of doing and just being able to get out on the floor with those guys. Finding his rhythm. Finding a little bit of a routine in pregames. He’s done a great job of finding himself with that group and understanding what he can do.”

Isaac had 18 points, 6 rebounds, 5 assists and 3 blocks in Thursday’s 125-121 road win over the Sioux Falls Skyforce. The 22 minutes were the most he’s played in his three games with Lakeland.

“That’s what’s so great about having that connection with Lakeland and the G League,” Mosley responded when asked if there’s been a benefit of Isaac playing with Lakeland before returning to the NBA team. “Being able to have those guys go over there, play within the same system, get coached in a different light but also understand what it takes to ramp yourself up back.”

Mosley didn’t rule out Isaac having another stint with Lakeland. Isaac flew back to Central Florida Friday.

“It goes back to that day by day,” Mosley said, “seeing how he responds, how his body responds.”

The Magic will play the Washington Wizards on the road to cap off the back-to-back.

This article first appeared on OrlandoSentinel.com. Email Khobi Price at khprice@orlandosentinel.com or follow him on Twitter at @khobi_price.