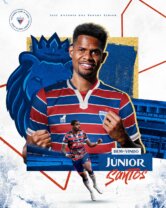 Fortaleza signed another player for the season. This is the striker Junior Santos, who already had a passage in the tricolor in 2019, for a value of R$ 3.6 million, with the duration of the contract until the end of 2025 . He belonged to Sanfrecce Hiroshima and was playing for Botafogo last season.

The 28-year-old athlete had a good regularity when he was at Fortaleza 4 years ago. Adding all competitions, Northeast Cup, state and Brazilian Championship, he scored 10 times in 27 games. With that, he quickly transferred to Kashiwa Reysol in the middle of the season, in a transfer that yielded to Leão’s coffers.

In addition to Sanfrecce and Kashiwa, Junior Santos joined Yokohama Marinos, in Japan. In total, he scored 28 goals in 98 participations in Japanese football, which aroused interest from Botafogo. Hired on loan by Fogão, the striker scored just one goal and two assists during the 2022 Brasileirão. He also played for Ituano, Ponte Preta and Oswaldo Cruz, the team in which he was revealed.

This is the eighth signing of the leonine team for this year in which it will compete in the Brazilian Championship, Cearense, Brazil’s CupNortheast and the liberators. That last one already starts in February, Leão will face Deportivo Maldonado-URU, on the next 23rd.