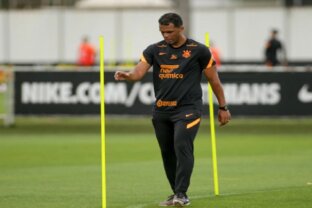 THE Corinthians de Vítor Pereira promoted several exchanges between the starting players and not between matches. Even this practice was not well received by the fans or by some athletes like Róger Guedes, who was dissatisfied whenever possible. However, Timão’s new coach, Fernando Lázaro, does not rule out this possibility.

Is Fernando Lázaro going to rotate?

THE Corinthians Paulista Championship started with a painful defeat against Red Bull Bragantino last Sunday (15). However, on Wednesday *18), in front of their fans at Neo Química Arena, Timão was better than Água Santa and won the match by 3-0.

Even with Yuri Alberto and Róger Guedes acting during the 90 minutes, Lázaro is concerned with the physical part and the demands of different competitions. Therefore, in an interview he said: “we already did this for this game (rodízio_), with some changes. The start of the season weighs on everyone. The athletes did not reach the physical apex. We managed Maycon during the break, due to wear. We don’t want to lose athletes due to physical issues, wear and tear, load. Athletes have been buying into the idea of ​​post-game recovery. The idea is not to make several changes at once. We are acting like this mainly in this beginning that not all times”.

For Róger Guedes, the 90-minute dispute was positive, and he said as he left the pitch: “it’s pre-season, we know it’s going to be difficult. We’re picking up the pace during the games, so it’s very important for us up front to play the full 90 minutes. We ask for this so much because it gives rhythm to the game”.

The comment received the endorsement of his partner in the attack, Yuri Alberto and he said: no player wants to leave the field, right? We really like to play 90 minutes. Last year, every game I was in the 90 minutes, I only left complaining of pain. I think it’s worth the effort. I wasn’t training this week, just treating my ankle. I still managed to score a goal and give two assists. It was worth the effort.”