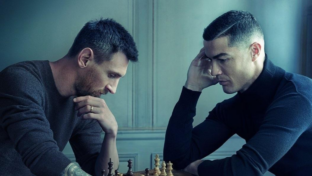 A few weeks after being announced as one of the greatest names in the history of football in Saudi Arabia, Cristiano Ronaldo will play his first game today in the team he chose to spend the final years of his career.

The 37-year-old Portuguese star, now an Al-Nassr player, will play alongside athletes from the Al-Hilal squad in a friendly against Paris Saint-Germain, starting at 2 pm (Brasília time).

As expected, the special match will pit CR7 and Lionel Messi against each other once again, in a long history of rivalry between the two most successful and admired names in football this century. This is a rivalry that the Saudi royal family, spurred on by a war of egos among its wealthy members, intends to take to the country from the second half of this year onwards.

This could happen because Al-Hilal, the biggest winner in the history of local football, did not like to see the spotlight turn to Al-Nassr after signing CR7 and dreams of signing Messi.

The idea is to hire the Argentine after the end of his contract with PSG, which ends in June. For this, they must offer the 2022 Cup champion a billionaire contract, similar to that given by his archrival to CR7, which mixes remuneration for the role played on the field and also for functions to promote the image of Saudi Arabia.

The desire to have Messi is not just a strategic issue for Al-Hilal to not lose space in its market, return to its number one team in its country and expand its name on the international stage. The plan is also the result of the desire to match his rival.

After PSGMessi X CR7 is a family matter

It is worth remembering that although the management model of the clubs there is similar, in practice it is not quite like that. The most traditional teams are historically backed by a member or clan of the royal family. So it’s a contest of greatness between cousins ​​and brothers after Messi’s departure from PSG.

Al-Hilal has traditionally been financed by the family sphere of Prince Mohammed bin Faisal, who died in 2017. It was thanks to the king’s nephew Salman bin Abdulaziz Al Saud that the club has established itself as the number one force in the local scene.

Al-Nassr, on the other hand, is increasingly close to the circle of Crown Prince Mohammed bin Salman, who also owns Newcastle, in England – becoming a true “family” dispute after Messi left the club. PSG.

Share
Facebook
Twitter
Pinterest
WhatsApp
Previous article
A major episode of snow is coming in the Tarn: here’s what to expect for the next few hours
Next article
Public appeal launched in bid to save Paddle Steamer Waverley