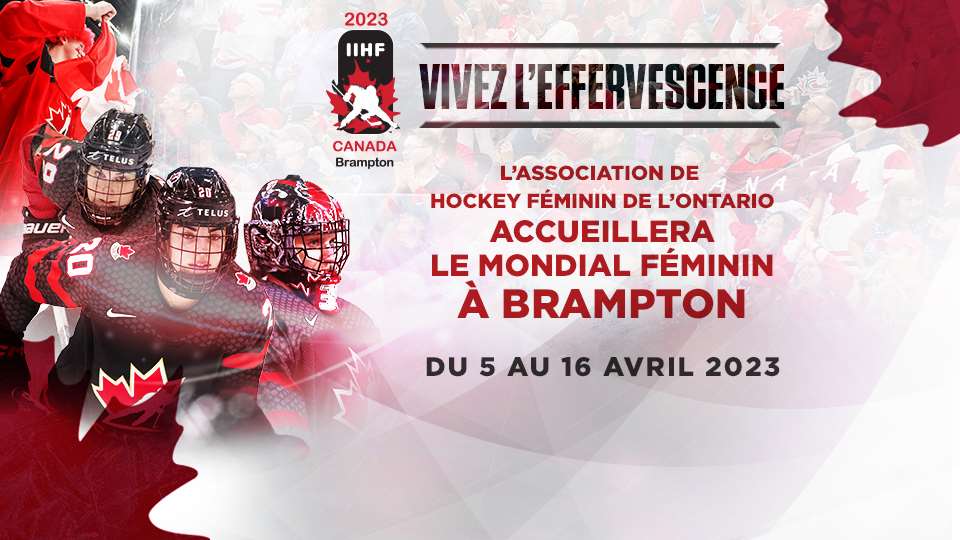 This weekend has been particularly busy for the French women’s team with three high-level matches in three days, while Les Bleues know a little more about their next elite World Cup, the second in their history.

The wait was very long. In fact, we knew that the next Women’s World Elite would take place in Canada, but mid-season, neither date nor specific location had been disclosed. Finally, we know a little more since Thursday evening and a press release from the IIHF initiated by Hockey Canada.

Les Bleues and the nine other best nations on the planet will meet from April 5 to 16, 2023 in Brampton, Ontario, a city in the western suburbs of Toronto. Toronto and its surroundings, the famous « Greater Toronto Area », had not hosted a Women’s World Cup since 2000. The matches will take place in the CAA Centre, an enclosure with a capacity of 5,000 spectators… ultimately not much more as the IceParc of Angers which had successfully hosted the last world title in D1A of the French team.

The date chosen is also interesting since the tournament will take place in the spring. It had been two years since the Women’s World Cup took place during the summer. In 2021, the initial deprogramming of the Halifax World Cup had finally forced a rescheduling in August in Alberta. At the end of August, this was also the slot adopted in 2022 in order to maintain a certain distance with the Olympic Games, given that the World Cup in Denmark was the first women’s world championship organized during an Olympic year. 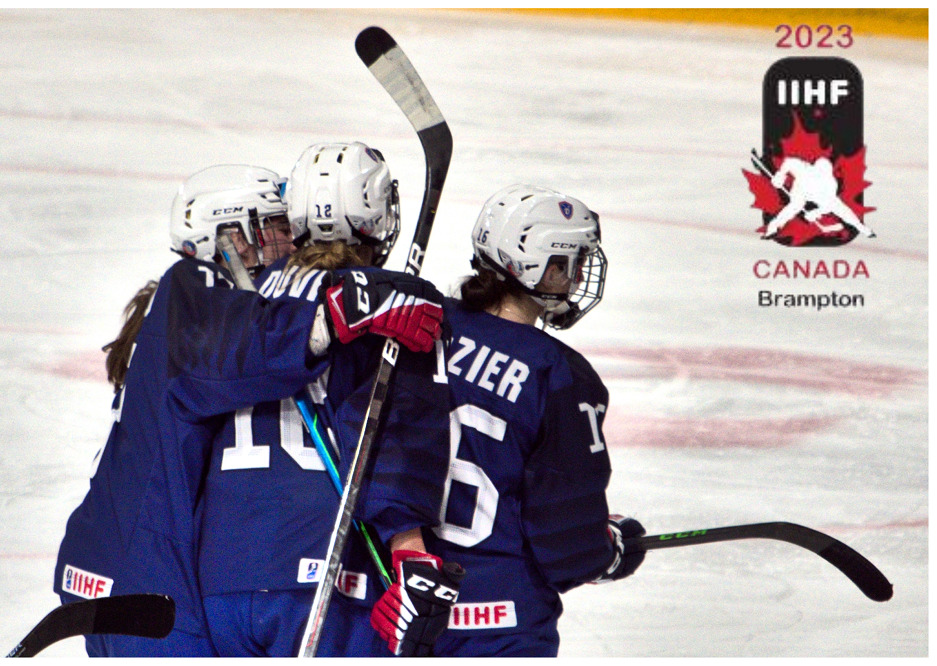 Programming in the spring is perhaps more judicious. The crowds last August in Herning and Frederikshavn were catastrophic (640 spectators on average), atomized by the lower division and Angers (1499 on average with a peak of 3586 during France – Norway). Suffice to say that it will be important to rectify the situation in Canada, in the logic of promoting women’s sport.

In Brampton, of the two level groups, France will obviously be in Group B, Les Bleues will face Finland (which made a historic slide from Group A to Group B at the end of the last World Cup), Sweden, Hungary and Germany. Only one team should be relegated, like last August.

A taste of the elite in Amiens

While waiting for more information in January 2023, Les Bleues continued their preparatory phase with a 4-nation tournament in Amiens at a high level.

The Habs started this tournament on Thursday evening against Japan, the fifth nation in the world. It was the Japanese who dislodged the Finns from group A at the last World Cup, the latter finished sixth after having been systematically semi-finalists since the first women’s world championship in 1990.

To tackle this tournament and this first high-level match, coach Grégory Tarlé has summoned a more seasoned squad and quite close to that of the last world championship, if we disregard the eight retirees. There are indeed a few more “North Americans” there: defenders Léa Berger, Mia Väänänen and Louanne Mermier, forwards Chloé Aurard, Jade Barbirati, Manon Le Scodan, Julia Mesplède and Lucie Turcotte, absent in November from Vaujany, they are present in Amiens.

However, the most spectacular return concerns Sophie Leclerc. Aged 25, this is her first summons in several years. The defender is indeed out of retirement, playing in Grenoble this season, she had played almost all international competitions between 2013 and 2017.

A touch of experience was welcome for a first major test, especially since, against Les Bleues, the Japanese coach Yuji Iizuka also fielded a team very close to that of the last World Cup.

Before Amiens, France and Japan have also improvised, before their confrontation, a first test at the beginning of the week in Louviers. Rui Ukita quickly opened the scoring, the French then pushing throughout the meeting. Until a goal from Lucie Quarto who equalized 30 seconds from the end of the match. “Smile Japan” as it is nicknamed, however, won this improvised test in overtime.

In Amiens, Mei Miura picked up the Bleues cold this time by opening the scoring after only three minutes of play. Three consecutive penalties from Japan did not allow France to equalize, Akane Hosoyamada allowing herself to double the put in the 27th minute.

And it will be three close penalties from France that will be fatal. Japan indeed capitalized on it to score twice on a double power play, by Yumeka Wajima, then 49 seconds later, by Haruka Toko. Estelle Duvin nevertheless reduced the score before the third period, 1-4. Good actions in the third period did not make up for the delay of a French team which stumbled in the middle third, not allowing to deliver momentum at the end of the match and worrying serene Japanese. The young goalkeeper Miyuu Masuhara, revelation of the Japanese team at the last World Cup thanks to brilliant performances which eclipsed nine years of monopoly in this position of the Nana Fujimoto monument, therefore yielded only once: 4-1 final score .

The next day, Friday, the Blues had an appointment with Denmark, relegated to D1A by Germany at the very last second. Incumbent goalkeeper Cassandra Repstock-Romme ended her international career aged just 21. Preferring to focus on her studies in dental surgery, she no longer saw herself occupying the position between the Danish posts at 110%.

Emma-Sofie Nordström, whose role was put on hold precisely by the tenure of Repstock-Romme, kept the cage against France. Margaux Mameri, who had only played one of the three games in November, was making her second start in a row in front of the tricolor goal. The Évry-Viry goalkeeper, however, had to lose the first, against Josephine Asperud, while the French could not take advantage, once again, of three consecutive penalties from their opponents. For a Danish penalty for overstaffing at the end of the first period, Clara Rozier still unlocked the blue power play.

A blue power play which also hit home at the start of the second period, thanks to Estelle Duvin who scored her second goal in the space of 24 hours. If Silk Lave Glud equalized at halftime, Jade Barbirati restored the advantage to Les Bleues in the 37th minute. A finally definitive advantage, the players of Grégory Tarlé maintaining this score of 3-2 until the end of the match. A great logical victory for France, which dominated the debates.

The 4 nations tournament in Amiens finally ended with a final opposition against Hungary. Japan, which has made its way into group A of the best at the next elite World Cup, Denmark relegated to the lower level, Hungary will, on the other hand, be an opponent that the Blues will meet in group B in Brampton. In Amiens, the Hungarians experienced good (a narrow 3-2 defeat against Japan) and less good (a 4-0 slap in the opening against the Danes). France have already met Hungary last month during a long undecided encounter since the Magyars won 1-0 with a winning goal eight minutes from time, while the French defense and Margaux Mameri had resisted for a long time.

Is the motivation there before kick-off?

Established this time, Charlotte Cagigos unfortunately folded quickly, after 69 seconds against Míra Seregély, already scorer against Japan. Anikó Németh, elected Hungary’s best hockey player for the 2021-22 season at the start of the week and who blanked France in the last two confrontations, was not established when she had played the other two games in Picardy. The young Zsuzsa Revesz (17) took place in front of the Hungarian goal, but Estelle Duvin was responsible for breaking through the wall in the 9th minute, equalizing at 1-1 in numerical superiority. Still on the numerical superiority, Regina Metzler nevertheless restored the advantage to the Hungarians in the first period.

In the second third, the Hungarians will drive the point home with two naturalized players. The “American” Hayley Williams then the “Canadian” Sarah Knee bring the score to 4-1. The fourth Hungarian goal decides Grégory Tarlé to change goalkeeper, Charlotte Cagigos giving way to Caroline Lambert, the goalkeeper of HC Thurgau in Switzerland.

Three penalties from Hungary cannot put France back in the game. Worse, 2’25 from the end, Lore Baudrit receives a penalty for obstruction, and in the space of 18 seconds, Kinga Jókai-Szilágyi adds a fifth goal: 5-1 for Hungary.

The French women’s team ends the year 2022 on a bad note with the heaviest defeat in the space of a year, against a potential competitor for the maintenance in the elite. Three of the five goals were also scored while Les Bleues were playing shorthanded, a strong point for the French in this configuration against Denmark. Another point to raise, we can deplore the few Picardy spectators gathered during this weekend, 500 to 600 spectators for 2882 seats, despite the posters proposed with three opponents who played in the last Elite World Cup. Without going so far as to compare with Angers, we are far from the fervor that Les Bleues experienced in Rouen or Épinal, or even in the stronghold of Vaujany which is doing as well as Amiens in an enclosure three times smaller in capacity… Are Christmas holidays or freezing weather the reasons?

In any case, the Hungarians line up a third consecutive victory against the Habs, they will meet again in February for the next preparatory stage, this time in Hungary. Norway and Slovakia, which the Blues had already played in November, will also be invited to this last tournament, before the deadline for Brampton and the World Elite.