Director draws attention to another “tremendous finisher” of the squad and says: “Suárez chose Grêmio” 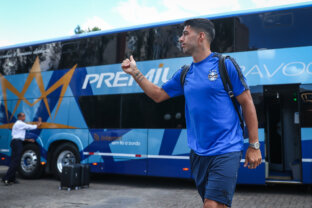 After the 4×1 victory over São Luiz for the Recopa Gaúcha, at the Arena, optimism is great in the direction of Grêmio for a 2023 season full of successes. The assembly of the squad, for example, went directly through the hands of football deputy Paulo Caleffi, who spoke a little more about the new players in an interview given to the GZH website.

One of the athletes highlighted by him is striker Everton Galdino, who came on loan for a year from Tombense and who is, in his words, a “tremendous finisher”;

“Fábio himself, I am convinced that he will deliver a lot. Reinaldo has a long career in São Paulo. We have Galdino, a Serie B standout, a tremendous finisher and who will also add quality to us. Pepê, Renato jokes that he sees Maicon playing. In fact, even the question of posture. If he lifts his socks up, maybe we’ll come across an even cuter Maicon (laughs). João Pedro now, more recently, is a player that we are betting on a resumption ”, he quoted.

Even with all these names, Grêmio’s great reinforcement, of course, is Suárez, who already scored three goals in his first game. Caleffi, who even went to Uruguay to close with the athlete, confirmed that he had a much better proposal financially from Cruz Azul, from Mexico:

“I had access to the proposal and it was an amazing deal, even for Luis Suárez, who is a world-renowned player and chooses where he wants to play. Also because I saw the Mexican proposal, without a doubt Suárez chose to play for Grêmio. It has no degree of comparison,” he declared.

Guild on the field again

Aiming for a good start in the 2023 Gauchão, Grêmio is already in Caxias do Sul to face Caxias this Saturday, 4:30 pm, for the first round of the state championship.