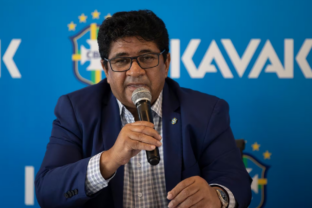 Willing to break the taboo of never having had a foreign coach in the technical command of the Brazilian team, the CBF started the attacks to define Tite’s replacement. According to information from UOL Esporte, president Ednaldo Rodrigues is targeting a face-to-face meeting with Carlo Ancelotti in the coming weeks.

the coach of Real Madrid he has already been speculated to take over the Brazilian national team behind the scenes, but he highlighted in interviews that he aims to fulfill his bond with the Spanish team, in effect until June 2024. The attitude of the Italian coach had an impact on a wave of pessimism in the entity, since he was considered the “plan A” for the function.

Despite the positioning, president Ednaldo Rodrigues has not given up on the attacks and intends to have a personal meeting with the coach. This week, the CBF representative signaled what characteristics the CBF is looking for in a coach for the Brazilian national team.

“We want a respectable coach, who provides a standard of play consistent with the athletes, who is offensive. We’ll give you everything you need to do an excellent job. We want a dedicated and committed coach”, declared Ednaldo, this week, at CBF headquarters.

In October of last year, intermediaries responsible for contacting Ancelotti heard from the coach a positive signal about at least listening to the proposal made to take over the national squad. After the protagonism in the last season, the Real Madrid has been going through a delicate moment, with a defeat in the Spanish Super Cup, against rival barcelonaand the loss of leadership in La Liga.

Also according to UOL Esporte, the CBF can have important help in negotiations across Europe for a new coach for the Brazilian team. With good traffic in the Old Continent, the former player Ronaldo Fenômeno offered to intermediate the contacts. The majority shareholder of the SAF shares of cruise was once a player for Ancelotti at Milan, and has idol status in Real Madrid.

The CBF recognizes the difficulty in hiring Carlo Ancelotti, from Real Madrid, but plans a face-to-face meeting in the coming weeks with the Italian coach.