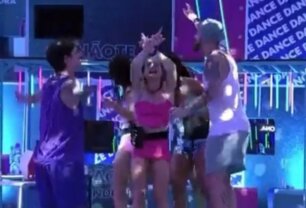 The BBB has started and, as always, thousands of people will unravel the lives of the participants. The most watched house in Brazil brings together fans of all kinds of entertainment. But what caught the attention was the participant Bruna Griphao. That even declaring herself a fan of Flamengo and Fluminensesang the song Basque from Gamma.

A Globo actress since she was a child, the cabin participant, as well as the other participants, revealed her favorite team. The problem is that Griphao generated controversy by declaring itself a supporter of Flamengo and Fluminense, at the same time. But even so, the actress sang a chorus of the fans of the Basque at the party last night

According to the GE website, Bruna Griphao said she was a fan of Flamengo on account of your father. And also a fan Fluminense because he defended the club in swimming in his youth. But she is not the only one. Actor Gabriel Santana declared himself a fan of Flamengo and Sao Paulo. But it didn’t have so much repercussion because the teams are not direct rivals.

Yesterday there was the first party of this edition, and at one point the song “Anna Julia”, by the band Los Hermanos, was played. It turns out that at the time of the chorus, the actress sang the version that is sung in the stands of São Januário, watch:

Seeing Griphao lead the chorus of the Vasco fans and make the symbol of Força Jovem, Fred, from Desimpedidos, asked if she was a fan of the Basque. In which the actress nodded and confirmed. Some netizens claim that the disclosures of the teams of the participants are wrong.

And of course this generated several jokes on the internet, where they compare the actress with Diego Souza. Who also joined in the fun was the official Maracanã profile. On her Twitter account, she was invited to watch a game at the stadium. be a match Flamengoof Fluminenseor even a FlaFLu.