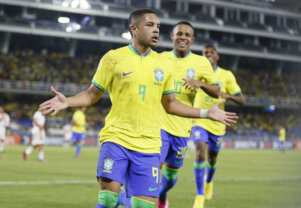 After a first half with few emotions and no goals, Brazil grew offensively in the final stage and beat Peru by 3-0 this Thursday night, at the Pascual Guerrero Olympic Stadium, in Cali-COL, for the debut of the South American Sub-20. Vitor Roque scored twice. Andrey saints scored the other goal.

The Brazilian team had problems creating during the half of the first half. The team improved in the final minutes, but failed in two conclusions with Guilherme Biro, midfielder Corinthians.

The second half was a tour of Brazil, which opened the scoring at 23. After the ball was raised in the area, Luis Guilherme scored with his head and Vitor Roque, striker of the Athletico-PRpushed for the goal.

The selection increased to 31 in a confusing bid with Andrey saints, Of Head. Luis Guilherme made the body game and the ball died in the back of the net.

Three minutes later, Vitor Roque was brought down inside the area and the referee awarded the penalty. The striker himself converted the kick and closed the score at 3-0.

Brazil is back on the pitch next Monday, at 9:30 pm (Brasília time), against Argentina, again at the Pascual Guerrero Olympic stadium.