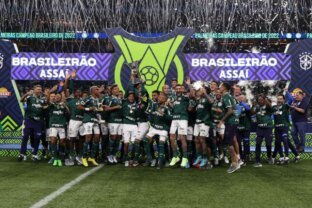 after the Flamengo to be chosen as the best club in the world by the IFFHS (Federation International of Football History and Statistics), national football accumulated another important award. Through its website, the respected body shared that the Brasileirão, in 2022, was elected as the strongest league on the planet, leaving Premier League, La Liga, Ligue 1, Serie A and Bundesliga behind.

“Brazil’s Série A is the best league in the world for the second time in the history of the annual IFFHS ranking launched since 1991.“, exalted the institute.

For the ranking to be determined, the leagues were listed on a points system. In view of this, the performance of palm trees, Flamengo, Atlético-MG, Fluminense, Corinthians and other clubs played a crucial role. In all, the Brasileirão added a score of 1181, something that gave it a considerable advantage over the Premier League (1086 points). In the future, as indicated by Ednaldo Rodrigues, a league could make national football even more organized.

See below the top-10 of the best leagues in the world.