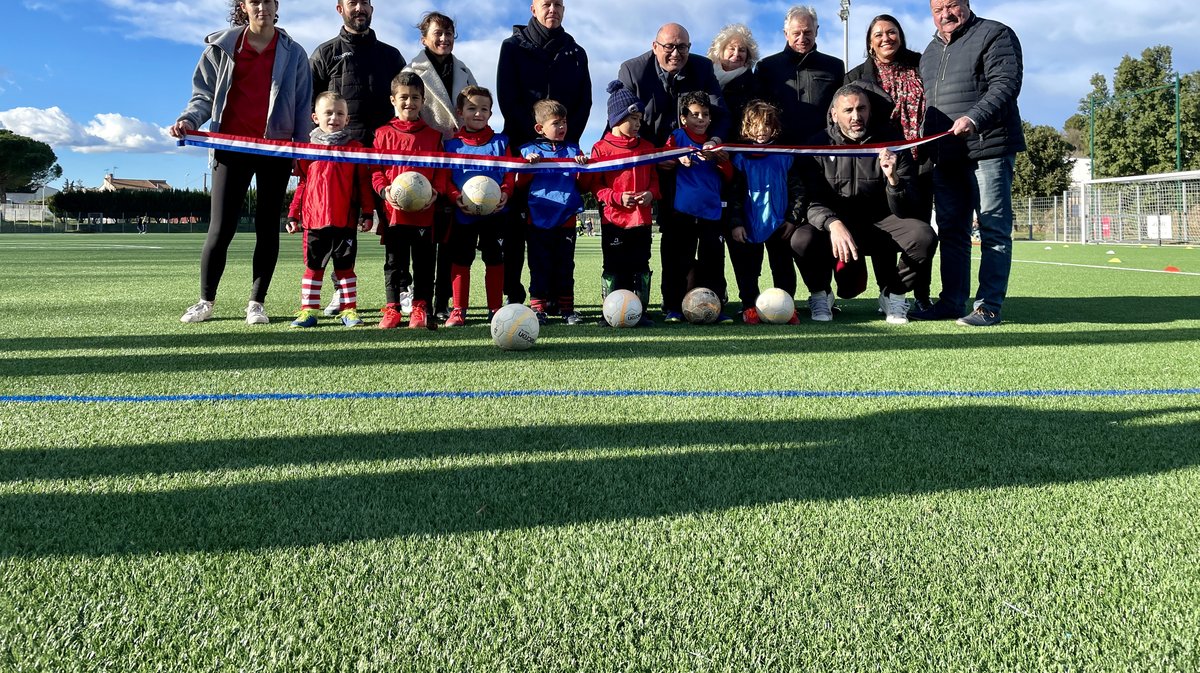 For a few weeks now, the 150 licensees of the Olympique Bellegardais club, as well as the schoolchildren of the town, have been practicing their sport on the brand new synthetic lawn of the Clairettes stadium. Next step: the demolition and reconstruction of the locker rooms.

Finish the “potato field“, to use the expression of the president of the OCB

, Karim Mimoun. For the past few weeks, the Clairettes stadium has had a new synthetic turf. A 100% polyethylene carpet, laid – after the earthworks carried out by the Lautier Moussac company and the installation of drainage and irrigation networks (**) by the Daudet Paysage company – over an area of ​​7,500 m2 by the teams of RevetSport, a company based in Charnoz-sur-Ain, in Ain. It was then filled with Vallabrix sand and encapsulated SBR, i.e. green rubber balls.The inauguration of this lawn took place on Wednesday 18 January. A ceremony during which Frédéric Loiseau, secretary general of the prefecture of Gard, sub-prefect of the district of Nîmes, recalled the water savings achieved by the municipality thanks to this new equipment. The economy is also financial, that is “ around€30,000 of expenses per year

Photo: S.MaIt remains to launch the demolition and reconstruction of changing rooms and toilets. A site that has fallen behind schedule and the reason for which concerns the placement in compulsory liquidation of the company in charge of the structural work. “But we will get there and at the end, the stadium will be renamed

The overall cost of this work amounts to just over 1 million euros including tax. Remember that this project is included in the local development contract 2022-2026 for which the municipality of Bellegarde benefits from an overall budget of €1.7 million. Subsidies were also awarded by the State (€189,000), the Occitanie region (€130,000) and the Department (€139,000).

An extract from the Minute Sports of Monday, January 16

At Clairette for training. Not spared from field problems for 20 years, the players of Nîmes Métropole Gard (D2) had the painful surprise of finding their training ground in Les Courbiers devastated by wild boars at the beginning of the month. Invasive mammals have left only a small piece of practicable ground for the FFNMG. Since then, the Nîmes have worked as best they could and they lost 16th finals of the Coupe de France 4-1 in Bordeaux (D1). Before returning to the championship and the shock of the poorly ranked D2 against Toulouse FC (normally on the Costières annex), the Nîmes leaders found a fallback solution: “From this Tuesday, the girls will train at the Clairette stadium in Bellegarde. We found an arrangement with the local club and the municipality. This could last until the Courbiers pitch is usable again, ”explains Christian Taves, the president of Foot Féminin Nîmes Métropole, whose club will train at a stadium located in the Beaucaire Terre d’Argence community of municipalities. .*

The OCB organizes its lottery this Sunday, January 22 from 6 p.m. in the three cafes of the town.**

A comfort watering to moisten the lawn in case of a match in hot weather.