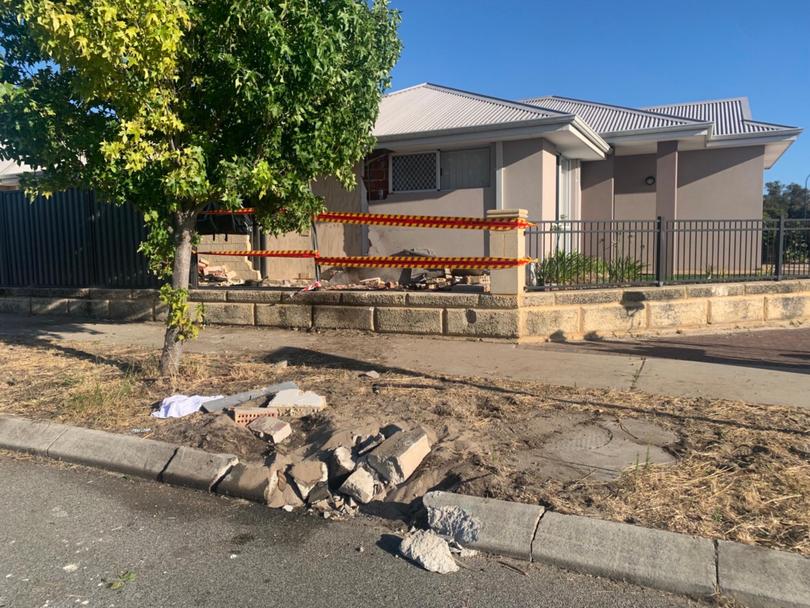 Horrifying CCTV footage has captured the moment a driver hoons through a red light before crashing into the bedroom of an Aveley home, narrowly missing a sleeping father on Thursday night.

The vision shows a yellow Mazda, which police claim was driven by a 21-year-old, speeding through a red light at the Millhouse Road and Verbana Drive intersection where he swerves to miss an oncoming car, about 11.15pm.

In the lead-up to the crash, you can hear the car hooning down the street and driving so fast its tyres screech on the road. The driver of the oncoming car suddenly breaks at the intersection and avoids what could have been a horrific crash.

Clearly in shock, the driver remains at the intersection unable to move as the Mazda continues to fly down Verbana Drive.

Seconds later, a loud bang — similar to an explosion — can be heard as the driver ploughs into the home of Eddie Flynn and his son Josh, totalling his car and destroying parts of the property.

The car hits a curb and goes airborne before smashing into the bedroom of Mr Flynn, where he lay asleep, taking down a structural wall and parts of the roof.

What’s left of his home is something out of a war movie with electrical wires dangling from the roof, brick and mortar sprawled across the floor, and debris covering the inside of the house.

Mr Flynn said he is “lucky to be alive” after the crash, with the car “literally inches away” from his bed.

“A car came through the wall of my room and completely devastated the room. The whole room just exploded into dust and debris,” he said.

“I don’t remember getting up, but I remember standing up and I could feel the metal from the (side) fence on me.

“It was pitch black but I could hear the driver just wailing (in his car), and that’s when (my son) came and dialled triple-zero.”

Mr Flynn had to crawl out of his room to escape the debris which took more than five minutes to manoeuvre through, adding he feared the driver was going to attempt to drive off because he was so incoherent.

“There is rubble all around (my bedroom), the only place that got missed was right where I was laying,” Mr Flynn said.

“I had to crawl over everything to get out.

“It was definitely lucky, I’m going to go out and buy a lotto ticket as soon as I can find my wallet.”

He added that his home was so severely damaged they lost access to their front door, forcing them to walk through their backyard just to escape.

A camera along Verbana Drive shows the Mazda on the wrong side of the road as he hoons through the suburban area and approaches a slight bend in the road.

SEE THE VIDEOS IN THE PLAYER ABOVE

Losing control of the car, the driver is then captured going over the curb and into the side of the home. Several lights from the car flash before going dark.

The front of the Mazda is completely totalled after the collision, with a tow truck pulling it out of the wreckage. The yellow car is covered in dust and debris, with nothing left of the front bumper.

The front of the Mazda is completely totalled after the collision, with a tow truck pulling it out of the wreckage. The yellow car is covered in dust and debris, with nothing left of the front bumper.

Neighbours who rushed out to help after hearing the loud crash said the driver kept flicking his hazard lights on and off, as well as adjusting the radio.

One neighbour said he “smelt of alcohol” and was “wailing” from his car.

It’s believed the driver attempted to call his parents after the crash, who live down the road. Neighbours said the mum was at the scene within minutes and was in shock and “screaming” at what she saw.

Mr Flynn said the parents were very apologetic at the time and said their son was “going through something.”

“A neighbour got the guy out of the car and laid him on the grass and they were working on him,” he said.

“I think he was unconscious but they were doing CPR and I believe he’s made it through, so they’ve done a good job.”’

Police haven’t confirmed whether the driver was under the influence of alcohol or drugs at the time of the crash, but did say he received minor injuries and was taken to Royal Perth Hospital where he is in a stable condition.

A St John WA spokesperson said he was taken to hospital under lights and sirens with serious injuries.

SES and fire crews also arrived at the home to ensure it was structurally safe and prevent it from caving in.