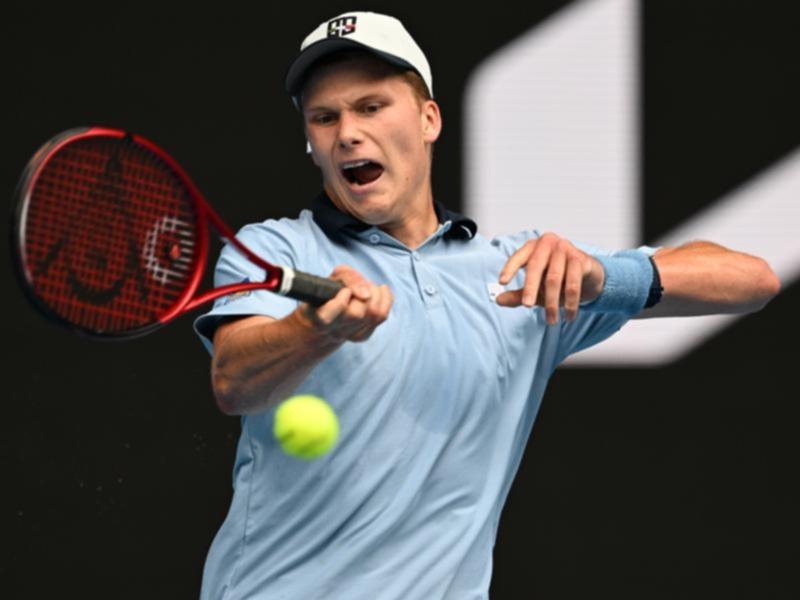 Unseeded American Jenson Brooksby has staged an improbable recovery to claim the biggest win of his career, sending world No.2 Casper Ruud packing in the second round of the Australian Open.

Brooksby looked a broken man – physically and mentally – after blowing three match points in the ninth game of the third set on Thursday.

The 22-year-old slumped to his chair during the changeover, muttering “How? How? How?” to himself and anyone else who cared to listen.

When Ruud claimed the resulting tiebreak, it seemed near-certain he would go on to seal victory.

But Brooksby somehow found the wherewithal to lift again, breaking the Norwegian’s serve twice early in the fourth set before closing out the 6-3 7-5 6-7 (4-7) 6-2 upset on his fifth match point.

“Casper is a warrior and I knew it would be a great battle,” said Brooksby, who is playing his maiden Australian Open, having missed the 2022 tournament due to a positive COVID-19 test.

“I’m really proud of my mental resolve after the third-set battle didn’t go my way and to be able to turn it around.”

“That’s going to be another battle for sure and hopefully we get a great court,” Brooksby said.

Ruud’s departure means the top two men’s seeds have bowed out in the space of 24 hours after world No.2 and defending champion Rafael Nadal lost to another American, Mackenzie McDonald, on Wednesday.

Fifth-seeded Russian Andrey Rublev also booked his spot in the third round on Thursday with a convincing victory over Finland’s Emil Ruusuvuori.

It’s the fifth time the 25-year-old Rublev has advanced to at least the third round at Melbourne Park, where his best result yet was a run to the quarter-finals in 2021.

The world No.6 lost his opening matches of the two Adelaide International events this month to Thanasi Kokkinakis and Roberto Bautista-Agut but is starting to find his groove at the year’s first grand slam.

His opponent in the round of 32 on Saturday will be Britain’s Daniel Evans after the No.25 seed made short work of Frenchman Jeremy Chardy, winning 6-4 6-4 6-1.

Now an even shorter-priced favourite to claim a record-extending 10th title at Melbourne Park following Nadal’s shock early exit, Novak Djokovic will take on Frenchman Enzo Couacaud in the opening match of the night session on Rod Laver Arena.