Are the Detroit Pistons tanking without saying so in an attempt to draft Victor Wembanyama? 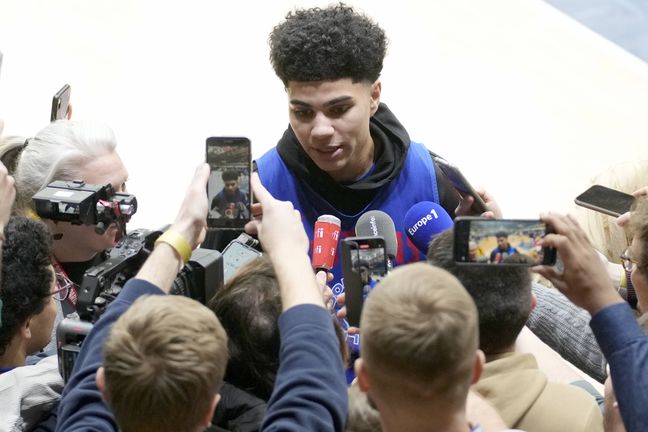 At the Marcel-Cerdan Sports Center (Levallois),

As a symbol, the Bulls and the Pistons trained this week at the Palais des sports Marcel-Cerdan, before the Paris NBA Game in Bercy, this Thursday (9 p.m.). And yes, in this same room where Victor Wembanyama flies over the Betclic Elite every week and panics the American League. The giant of the Mets (19 years old, 2.21 m) will of course be one of guests the most watched tonight, with Magic Johnson and Tony Parker, the day after his victory at Fos-sur-Mer (82-83). After all, it’s important to get a front-row seat to your future NBA team, isn’t it? We are obviously trolling, but the current red lantern position in the Eastern Conference of the Detroit Pistons makes them a serious candidate to inherit the first choice of the next draft, and therefore to bet on the French interior to envisage a better tomorrow. .

So, tanking or not tanking, dear Pistons? the tankingit is this concept of voluntarily losing games in an endless regular season (82 games) in order to optimize its chances of being able to choose one of the young prospects the most promising during the draft, and therefore to significantly improve his team. Journalist for The Athletic and follower of the Pistons, including in Paris this week, James L. Edwards is formal: “No, I will not say that the Pistons are playing tanking, they try to develop young players and build for the future. And when you play with so many young people, it’s natural to lose games in such a top league. Rather than betting more on experienced players, they want to rely on the draft and the free agency [le marché des joueurs libres] to build on the long term and try to create a culture of winning with these young people.

“We just have to grow and become more mature”

This is obviously not obvious at the moment, with this terrible record of 12 wins for 35 losses (only the Rockets do worse in the whole NBA). However, the tricolor leader Killian Hayes (21), currently very prominent, refuses to speak only of a long-term project: “No, our goal is always to win. A player never wants to lose. We had a complicated start but the season is still long. I think we have a very talented team. We just have to grow and become more mature, because we make a lot of mistakes that cost us games”.

Head of the basketball section on beIN Sports, Xavier Vaution shares this observation: “I don’t believe for a single second that they are looking more than another team to tank, even at the level of their leaders. It would be extremely risky, since they could take fines from the League if they spoke about it or if it was seen. They are still kids and they find themselves in the craziest and most indecisive regular season we have ever known, so much talent is everywhere. But they are not catastrophic, they hang on in games and they do not play for their individual stats like in Houston and Charlotte.

Despite his shin injury which cost him surgery and a withdrawal for the rest of the season, Pistons star Cade Cunningham is on the trip for this #NBAParisGame, and even chained the shots against an ex-All Star in training. You have it ? pic.twitter.com/YwDTIuRswd

And to better remunerate 20 Minutes, do not hesitate to accept all cookies, even for one day only, via our « I accept for today » button in the banner below.

Nevertheless, if the former Choletais is currently in the spotlight, it is largely linked to the absence until the end of the season of the most promising player in this squad. Cade Cunningham (21 years old). And it’s not a « classic » injury, but a shin operation that could have been avoidable in the short term, but which the number one in the 2021 draft suffered in December. Enough to reinforce, according to some, the thesis of a deliberately messed up season to try to inherit Victor Wembanyama. James L. Edwards tells us more about the Cunningham episode (19.9 points per game on average):

Knowing Cade, if the team had been in a better position at the end of 2022, he probably would have made a different decision. The franchise let him decide if he wanted to continue playing without surgery. And there, he personally felt that the best option for him was to think about his long-term career. »

Second interesting example of the strategy of general manager Troy Weaver, who arrived in Detroit in 2020: the team’s top scorer Bogdan Bogdanovic (21.2 points on average) could be exchanged before the trade deadline (sort of NBA transfer window) of February 9. “The Pistons will only trade Bogdanovic if they receive a proposal that cannot be refused, says James L. Edwards. Afterwards, it’s not like they manage to win a lot of games with him… He’s an advanced age (33), so if a team offers a good first-round pick, it could be done. But they’re not going to sell it off. »

The fact remains that even more than those of the Bulls, Pistons fans are damn eating their black bread, if we refer to the rich history of the franchise, double NBA champion in 1989 and 1990 with its famous bad boys who have long driven Michael Jordan crazy himself. Then in 2004, with a substantially identical recipe, apart from the brutality +++ (although), the Pistons did it again, being able to block the Indiana Pacers at an average of 73 points per game over the entire conference final, before to asphyxiate the Lakers (4-1) in the final. Another time, like this 6th trench game against Indiana, with a result (69-65) which could almost become a classic halftime score in the NBA of 2023. « arrival of Grant Hill in the franchise » in 1994, the Lyonnais Adrien Gérinière (39 years old) looks back on the evolution of the Pistons for 20 years.

There were some really great years with Larry Brown as coach and the Wallaces [Rasheed et Ben] in the racket. Along with Billups, Hamilton and others, this team had incredible basketball IQ and defensive identity. After the ten really disgusting years we’ve had, if the objective of general manager Troy Weaver is to find this Bad Boys identity as he announces, banco to wait for a few years of reconstruction, by betting on the draft like the Warriors did with Steph Curry, Klay Thompson and Draymond Green. But it has to follow on the field, and there players like Jaden Ivey and Hamidou Diallo leave huge air holes in defense. »

“Victor will have a direct impact in the NBA”

Hey, wouldn’t there be a new absolute defensive bully in the NBA in a few months, with his endless segments and his timing (3.1 blocks on average in Betclic Elite)? On May 16, Pistons fans will know from the lottery pick if they can start getting flocked « Wemby » jerseys. It should be remembered that since 2019, and precisely to limit the tanking at the end of the regular season, the three worst records now have only a 14% chance of winning the first choice. In 2021 and 2022, Detroit was part of the “winning” trio and had been spoiled, with the first choice in 2021 (Cade Cunningham) then the fifth choice last year (Jaden Ivey).

To what extent can Killian Hayes finish convincing his leaders in favor of his compatriot, if the Pistons ever inherit the jackpot? « Victor has an exceptional talent, and I really hope he will be the first pick, it must be, believes the young tricolor leader. No matter where he goes, he will have a direct impact in the NBA. It’s the next big thing, but it’s not my role to choose who we’re going to take. “He will probably even take care not to appear too complicit with him, this Thursday evening at Bercy, because the ruthless American league would be well able to sanction him financially for that.