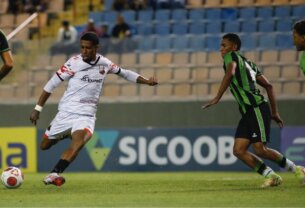 América-MG won another challenge in the World Cup Sao Paulo de Futebol Júnior, this time, Coelho ran over Ituano, by 3 to 0, this Thursday (19), at Arena Barueri.

The team from Minas Gerais showed great power in controlling the ball. In this way, América-MG opened the scoring after three minutes, after a lack of definition in the area. Renato Marques secured the surplus and made it happen.

With the handicap, Galo de Itu’s structure was shaken, which made Coelho’s work easier. At 21′, the scorer of the first goal crossed for Breno, who scored with a header. Gradually, Ituano began to enter the game, having some good opportunities to reduce the advantage. However, the first half ended 2-0.

The two teams did not play such different football in the final stage. While the red-black tried to advance in the offensive field, América-MG maintained control of the ball, scoring a great goal with Adson, in the 20th minute. Final score 3-0.