Agustín Rossi should play with Cristiano Ronaldo before Flamengo 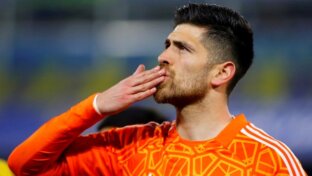 The signing of the new Flamengo goalkeeper, Agustín Rossi, should gain another chapter even before the athlete lands in Rio de Janeiro. According to journalist César Luis Merlo, the current Boca Junior goalkeeper has an agreement to play for Al Nassr, in Saudi Arabia. According to the reporter, the athlete should be loaned until the end of his contract and play alongside Cristiano Ronaldo.

Agustín Rossi has a pre-contract signed with Flamengo to arrive in July. However, the player is away from the Argentine club and received a proposal to take Ospina’s vacancy, injured and therefore must play with Cristiano Ronaldo. The Saudi club must pay more than US$1.5 million for the loan, in addition to bringing the teams closer together for future deals.

Agustín Rossi will continue acting before arriving in Brazil

Flamengo was carefully watching the situation of its goalkeeper. Agustín Rossi was being removed from Boca Juniors and would not play until the end of his contract, which expires in 5 months. With that, the Rubro-Negro club itself would try to anticipate the arrival of the athlete, something that was discarded by the Argentine team with which the player has an agreement.

The Argentine goalkeeper’s new contract will now give him the opportunity to continue playing. The situation should be finalized in the next 48 hours and Agustín Rossi can be announced by Cristiano Ronaldo’s club. On social media, Flamengo fans observe the situation carefully. First for fear of losing the player and also for the unusual fact that the athlete will have a new bond before arriving at the Rio de Janeiro team. The agreement between the archer and Flamengo is already signed for July 2023.