after victory in Paulistão, Fernando Lázaro reveals the “strength” of the group 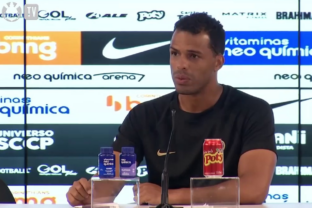 Last Wednesday (18), the Corinthians received Água Santa at Neo Química Arena for the Paulista Championship and emerged victorious by the score of 3 to 0. After the victory, in a press conference, Fernando Lázaro highlighted the group’s “unity” as one of the strengths of this Corinthians.

In the post-game press conference, Lázaro was asked about celebrating the first two goals of the black and white team, in which Yuri Alberto and Róger Guedes, respectively, went to hug the coach. “It is the strength of the group. It is a group that has a very healthy environment, a direct relationship with the athletes” said Lázaro, stating that he understands the context of the Corinthians squad and has a good relationship with the players.

According to the technical Corinthians, this good relationship strengthens the cast. “This is one of the strengths of the group, I believe, and always bringing a positive side as a group, nothing individual, but as a group this is a brand and will be part (of the work), I believe”, concluded the coach of the Helm. Check out Fernando Lázaro’s full response:

the victory of Corinthians over Água Santa, 3-0, brings a recovery for Timão after defeat in Paulistão’s debut against Red Bull Bragantino. At the moment, the Corinthians is in third place in Group C, with the same three points as Ferroviária, who will still play this Thursday (19), against Sao Paulo. The leadership is with São Bento, who has four points.

Timão returns to the field for Paulistão next Saturday (21), at 6:30 pm (Brasília time), to face Inter de Limeira, in Limeira. Member of Group A, the team from Limeira has three points and is in fourth place.