After retirement at 24, years ex-Grêmio can return to professional football 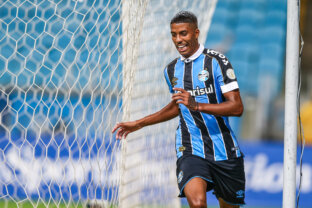 Recently retired by Grêmio, aged 24, Jean Pyerre may be thinking about a return to professional football. According to the publication of the GZH portal, the former shirt 10 Tricolor has been speculated in some foreign clubs, which includes teams from Russia.

Jean Pyerre analyzes possible proposals and has maintained a training routine. In addition to physical preparation, the former gremista number 10 also plays in his own society soccer team.

The athlete surprised when he announced that he would leave professional football at the end of last year, which was confirmed by Success Sports, the company that managed Jean Pyerre’s career.

“The Success Sports team, responsible for managing the career of the athlete Jean Pyerre, announces that he is ending his career as a professional football player. The decision was made by the athlete and respected by his family and Staff. We know of Jean’s potential and we hope that this is not a final decision”, he posted at the time.

Jean played in 164 games, where he scored 23 goals representing Grêmio and Avai. At the beginning of last year, the athlete was loaned to Giresunspor, in Turkey. In the club’s medical examinations, the athlete discovered a rare type of cancer in the testicles, which motivated him in his decision.