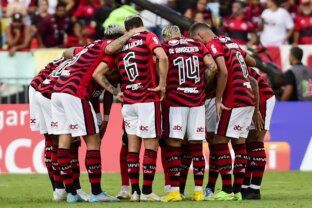 Flamengo will enter the field for the 3rd round of the Guanabara Cup. Thus, it will receive Nova Iguaçu in Maracanã, at 4 pm (Brasília time). Check out the Rubro-Negro news that pumped today.

Exaggeration of criticism of the coach of Flamengo

on the podcast Ball possession, from UOL, journalist Mauro Cezar Pereira came out in defense of Vítor Pereira. Thus, the Portuguese coach was heavily criticized for the changes made during the confrontation with Madureira last Wednesday (18), which ended without goals. Therefore, Mauro Cezar did not recommend that definitive sentences be made, in addition to asking that they stop considering Vítor Pereira a “Professor Sparrow”. Finally, he considered the resistance offered by Madureira’s defensive play positive, in order to test Flamengo’s deficiencies.

Free to play for Flamengo from the middle of the year, Argentine goalkeeper Agustín Rossi was not listed by Boca Juniors for the Argentine Super Cup decision. Thus, the Xeneize club was defeated by 2 to 1 by Racing, in the only game held in the United Arab Emirates. Shortly after the match, Boca coach Hugo Ibarra spoke about Rossi being barred. “A team from Brazil (Flemish) communicated about a pre-contract signed with Agustín and this year I decided that all my players have to be 100% committed to the club“, justified.

Manchester United have set a price for Uruguayan Facundo Pellistri. Thus, if Flamengo wants to take the 21-year-old striker who was in the 2022 World Cup, it will have to pay 15 million euros (R$ 84 million, for the current conversion). The athlete has not been used by coach Erik Ten Hag and is also considered by other clubs in Europe.

Faced with the high frequency of matches at the beginning of the season, Flamengo’s coach, Vítor Pereira, established the squad’s minute balance. That is, the intention is to promote a cast rotation, just like Dorival Júnior did last year. As per the ge.globethe Portuguese coach had a meeting with the technical commission and members of physiology to corroborate the decision.

Shortly after being honored by Flamengo fans with a bust at Centro de Futebol Zico (CFZ), Galinho criticized the charges and demands made on social networks. Thus, he addressed the absence of former players at the funerals of Pelé and Roberto Dinamite. “They are charging too much, that you have to go to this, to that. Man, everyone has their own way of praying for this one, for that one“, declared Zico, adding: “Today, there is a lot of pressure on top of everything. Imagine me, I’m going to be 70 years old and someone has to tell me what to do“.