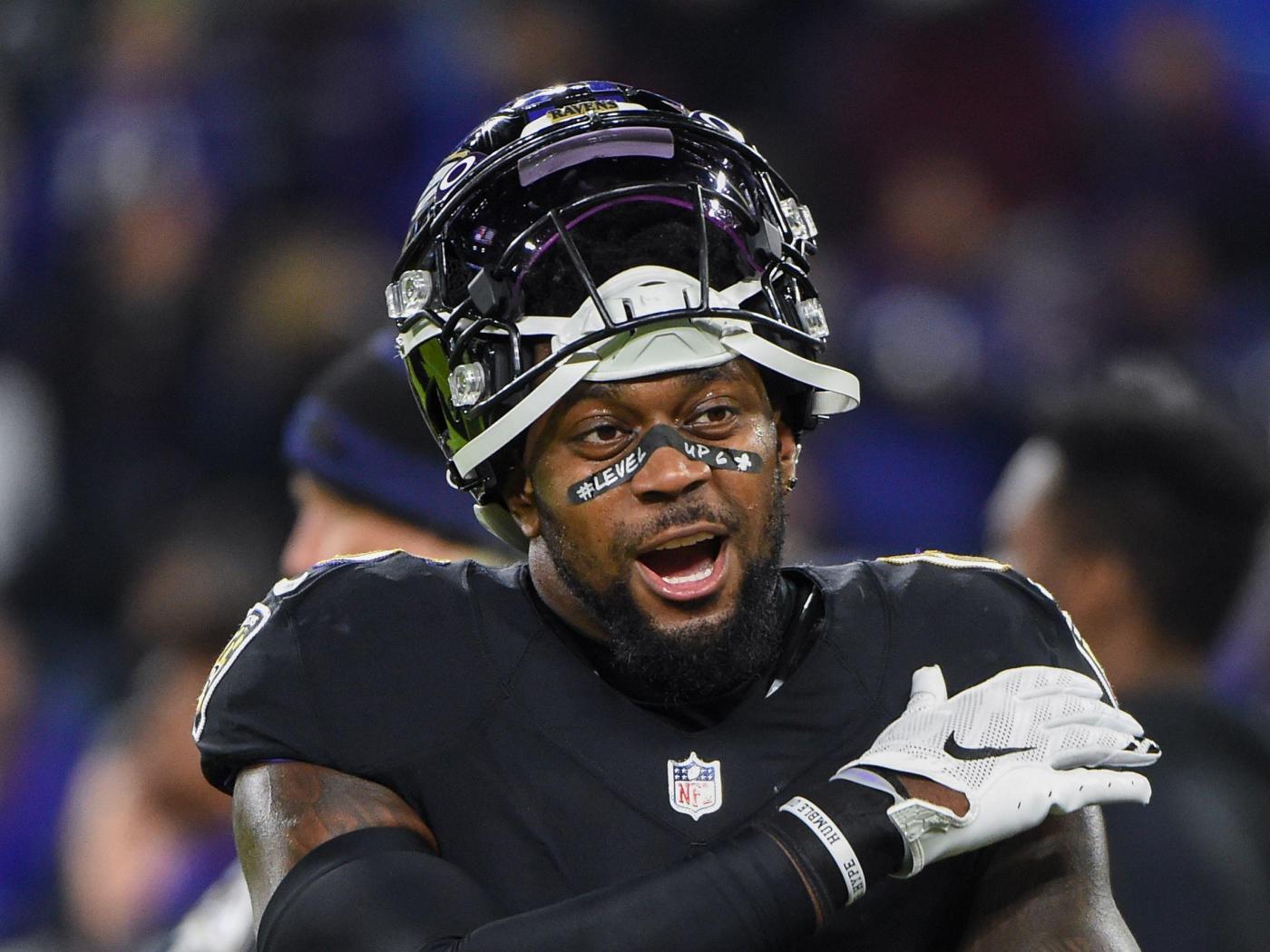 Three days before maybe the best game of his career, Ravens inside linebacker Patrick Queen stood outside the team’s locker room and talked about sharks. His handle on Twitter is a shark emoji. He once asked his tens of thousands of followers whether they’d rather fight a cheetah on land or a shark in the water. (He’d rather take his chances on land.) Queen can’t explain where the fishy fascination began, only that it started as a kid and hasn’t faded since.

“I don’t know what it is,” Queen said Thursday. “I just like how they are calm creatures, but at the same time, they’re very dangerous and stuff. So I feel like that’s how I am. Off the field, I’m cool. I’m just chill. But once I get on the field, I feel like I’m just dangerous.”

Queen’s taken a bite out of offenses recently. On Sunday, he had a season-high 12 tackles, recorded his fourth sack of the year and led a dominant Ravens defense in a 13-3 win over the Carolina Panthers. According to Pro Football Focus, the 2020 first-round pick, a lightning rod for criticism over his two-plus seasons in Baltimore, has graded out as the NFL’s second-best off-ball linebacker since Week 5, behind only the Buffalo Bills’ Tremaine Edmunds.

“Patrick Queen has been playing great football,” coach John Harbaugh said after the game Sunday, “and today, just took another step in that direction.”

Before that last step forward, Queen talked with The Baltimore Sun about his transition from LSU, his second-year struggles under former defensive coordinator Don “Wink” Martindale, his renewed confidence and comfort and whether he’s reached out to free-agent wide receiver Odell Beckham Jr.

(Editor’s note: Questions and answers have been edited for brevity and clarity.)

Coming from that stacked 2019 LSU team, you and a bunch of your teammates were drafted. You’ve seen certain guys do their thing, certain guys take time to find their home. Has that process of seeing not only your development here, but also seeing how some guys have really latched on and some guys have struggled, given you a perspective on landing with the right team, the right coaching staff, the right culture?

Me, I played the weak side [as an inside linebacker] in college, and coming to the league, I played Mike [middle linebacker] coming into Wink’s system, which is very complicated. So it’s just a hard time adjusting to learning it.

I think it’s easier for skill players to come into the league and just be able to do what they do because — I ain’t taking nothing away from them … but defensive-wise, you’re trying to learn. You’re trying to adapt to what offenses do each week. There’s something new — new game plan, new this. But as far as offense, it’s just like, “OK, they run these coverages, they run this, they run this.” Yeah, it’s still a lot of work, but at the same time, I feel like it’s easier for a skill player to progress than the defensive player.

One thing that’s interesting with this data revolution is that it’s tough to evaluate off-ball linebackers. You can skew the numbers in your favor or not in your favor. I know you have a complicated relationship with Pro Football Focus, but do you think it’s difficult for the normal person or algorithm to decide whether you’re doing a good job or not on a snap-to-snap basis?

But at the same time, nobody can push me harder than I’m going to push myself. Nobody’s a bigger critic than I am. So when it comes to stuff like that, it’s just, like … I don’t know. I just look at it and sometimes just laugh. I used to clap back at people because I was just like, “You have no idea what you’re talking about, so now I’m about to show you that you don’t know what you’re talking about.” Then I’d get into the argument of, like, “Oh, now I just want to be relevant.” “Oh, you’re coming back to a regular person.”

Like, yeah, I’m coming back. It’s not that big of a deal. But I just don’t feel like people outside of what we got should have that effect on us. Just be a fan. You can criticize us if it’s right to criticize, but there’s a certain way to criticize players. You go out there calling people “b-words” [bust] and stuff, there’s a level to it.

John Harbaugh has said that you want to be good so bad. I wonder if you think there was an insecurity in you clapping back at people because you wanted to be seen a certain way, and you weren’t happy with that perception.

So just going back to my rookie year, I felt like I was doing my job as a rookie should. … Second year, I started off rocky, and everybody was criticizing me, rightfully so. But, like I said earlier, I don’t like the criticism of, like, disrespect. You can criticize me, but don’t let it be with disrespect — the b-word or, “He’s never done anything for us.” There’s multiple times where I’d hear that stuff, and I feel like that stuff gets old. But you can make great plays all game, and you can have one bad play, and that’s the only play that gets talked about.

In training camp, defensive coordinator Mike Macdonald said that, through no fault of your own, you didn’t know full-field passing concepts coming into the NFL as well as you do right now. In the Southeastern Conference, there were a lot of half-field passing concepts. How much of a factor do you think that was for you?

In college, you know the [pass] rush’s getting there, so he ain’t got that much time to throw. But as far as the NFL, the whole line’s good. They’ve got time to go through their progressions. And I didn’t play Mike in college, so it wasn’t like I had to go through progressions. I played Mike on third down, and it was just, like, either blitz or run the seam.

I remember you carrying wide receivers up the seam against Clemson.

But coming in, you don’t know all that. You just see the same type of concepts, so you’re thinking, “Oh, I’ll play the same.” I think that’s what you learn and you grow into. It’s like, “OK, just take a step back and slow down and just ask someone to break it down for you.” And I think that’s the big thing [former inside linebackers coach] Rob [Ryan] helped me with last year, was breaking stuff down to make it simple. And then seeing [current inside linebackers coach] Zach [Orr] and Mike come in … it’s so simple now. They really helped us with that. So now, being in Year 3, that’s why I said I took the leap — because it’s actually easier to understand now.

Back in April, after Macdonald and Orr were hired, you said you had coaches who trust you. I know you’re not the kind of guy to throw people under the bus, but what does that quote mean when you consider how you’re doing right now?

It means a lot because you know when you go on the field, you understand the playbook, for one. It’s not like it’s changing every day. And once you get into the game, it’s like, I know what coach told me and I know coach trusts me, so I just go out and play my game. That’s why I feel you see now that this team’s so much more comfortable communicating, because everybody doesn’t feel like they’re wrong when they communicate something. It’s just, like, everything’s flowing now.

Do you feel like being where you are right now mentally has made you a happier person?

Yeah, definitely. Last year was rough, especially with the stuff I had going on. … It was just rough. Every day was like coming to work, like, “I wonder what’s going to be the problem today?” Now, as you come to work, it’s like, “I can’t wait to get to work now.” You’ve got guys here that you know.

That’s how I should’ve approached it last year: coming here for the guys. But instead, I was more coming here for myself, focusing on myself as far as knowing I’m about to get fussed at for something that’s probably not my fault. But it’s just way different now, like I said. I come here now, I can’t get wait to get to work. … We’ve got all kinds of guys. Happy guys in the locker room. Got Harbs. Just better vibes.

Do you feel similar vibes with you and Roquan Smith in terms of being one of the best pairings at your position?

That’s the point that we’re trying to get across to each other: “We’re going to get there.” It might take a little time just to get the chemistry down, see how each other’s playing, just knowing what we can do with each other and stuff. I feel like once we get that chemistry down, once we get down pat how each other plays, I feel like it’s going to be that point where nobody’s going to do nothing. We just played the [New Orleans] Saints on Monday night [in Week 9], and it was a great offense that we played, and I wouldn’t say shut down, but we pretty much had the business. … I feel like, as time progresses, just continue to have faith in each other and keep working with each other, and the sky’s the limit.

As an LSU guy, do you have a line to Odell Beckham Jr.? And have you made your pitch to him to come to Baltimore?

I haven’t made my pitch yet. I probably will soon. I saw we weren’t on the list [of teams reportedly under consideration]. I’ve got a problem with that, so I’m about to check in with him.

Come be a Raven. We’ve got Lamar [Jackson]. Simple.

Tanis: chef Virginie Xerri in the spotlight on Canal +

SaiPa, who is in a losing streak, apologized to his fans

SaiPa's goal difference during the losing streak is 5–27.SaiPa is the Liiga's jumbo with a difference of seven points. Mikko Lieri / AOPLappeenranta's...
Read more
Europe

Tanis: chef Virginie Xerri in the spotlight on Canal +

SaiPa, who is in a losing streak, apologized to his fans

SaiPa's goal difference during the losing streak is 5–27.SaiPa is the Liiga's jumbo with a difference of seven points. Mikko Lieri / AOPLappeenranta's...
Read more
Europe