Ben Harvey: How I made it through an entire year with my annoying dog Clancy 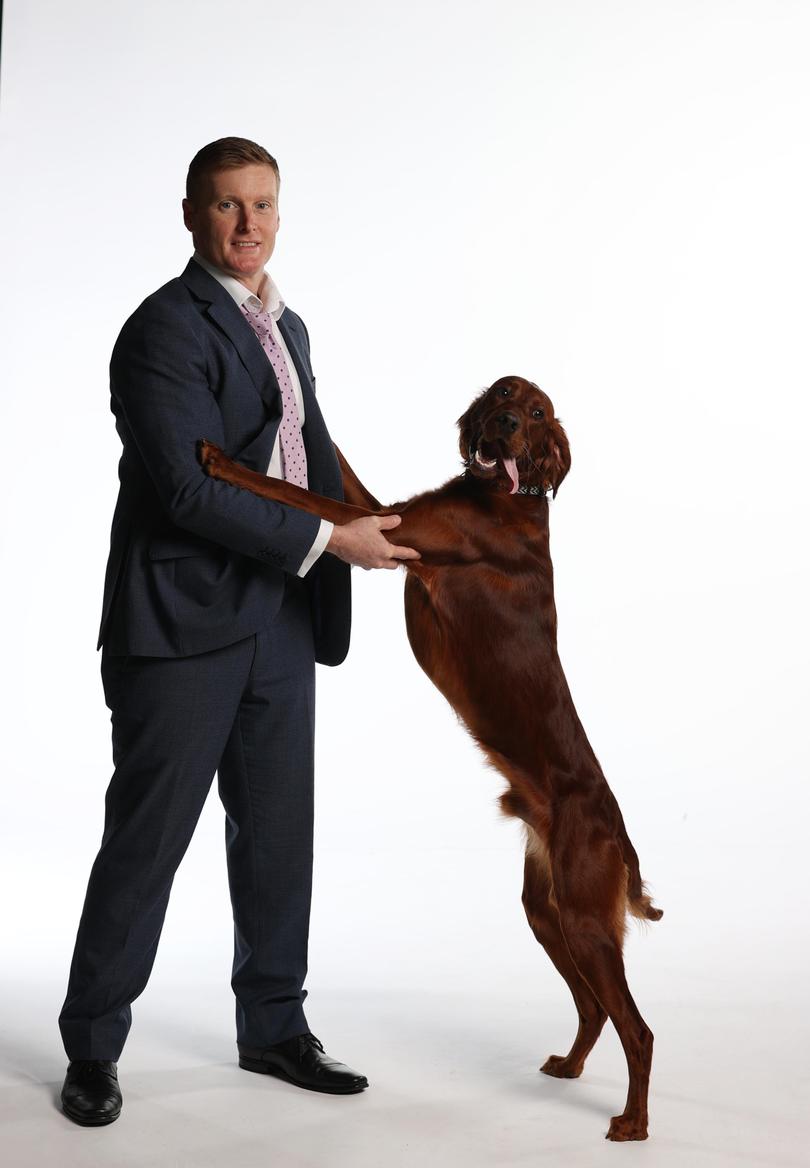 Our dog Clancy is about to turn one.

I say “our dog” because he technically belongs to the family but I should really say “my dog” because I’m the one who feeds/walks/washes him and picks up his ever-generous servings of poo (mental thought: get up early and throw newspaper in bin so family doesn’t read this).

Regular readers of this column might be surprised that Clancy and I got through an entire year without me killing him or him eating me.

It’s been a challenging period primarily because I am impatient and intolerant (I threw a thong at him last night because he was blinking too loudly) but also because Clancy is incapable of going more than three minutes without annoying someone.

Over the past year everything about this Irish Red Setter has got bigger. Everything except his brain.

You remember the hapless dog Odi from Garfield? If Odi and Clancy hung out Odi would be the brains of the operation.

Clancy’s one skill is consumption. He eats faster than a fat kid at the Margaret River Chocolate Company samples counter. It’s like James Dyson engineered his gut.

After I fill his bowl I make him stay for a few minutes before he’s allowed to eat. You cannot comprehend how much drool one animal can produce in two minutes. He looks like his jowls are pinned to the floor by stalactites.

He is very strong and could till a field if he was strapped to farm machinery. Walk him for 20 minutes and you feel like you’ve competed in the CrossFit Games.

I have myself to blame for his behaviour on the leash because I like to let him have a good sniff when we are out so I’d correct him as regularly as I should.

It means we cover very little ground in the hour or so that we are out in the morning but that’s also because I stop to throw copies of The West onto the porches of homeowners who have it delivered.

We have tried all sorts of things to make Clancy more manageable on the lead but so far nothing has worked. The poor bugger tries his best to walk by my side but he’s so easily distracted you can see smoke coming out of his ears after four minutes of intense concentration.

I’m pretty sure there’s a bloke at our local dog park who has a shock collar. I gotta say, I’ve been tempted. But Clancy would trigger it so many times I’d need to wheel a car battery behind him.

You see, this dog doesn’t believe in cause and effect; everything is a remarkable coincidence.

Pull ahead on the lead and get yelled at and dragged backwards? What a coincidence!

Jump on the couch twice and get yelled at twice and pushed off twice? What are the odds?

Get thrown in the laundry after escaping from the shower and running through the house? Good grief, the exact same thing happened last week when I was being washed. What is up with the universe …

I can’t blame him for wanting to escape bath time. He hates being washed as much as I hate washing him, regardless of how much I try to calm him.

God knows what my neighbours think when they hear us in there.

“Such as handsome ginger man!”

The people in my street probably think I’m running a gay sauna as a side hustle.

From a kitchen utensil, as everything shows, it started fire in an apartment in the center of Athens, in the area of Colonou,...
Read more

From a kitchen utensil, as everything shows, it started fire in an apartment in the center of Athens, in the area of Colonou,...
Read more
Europe