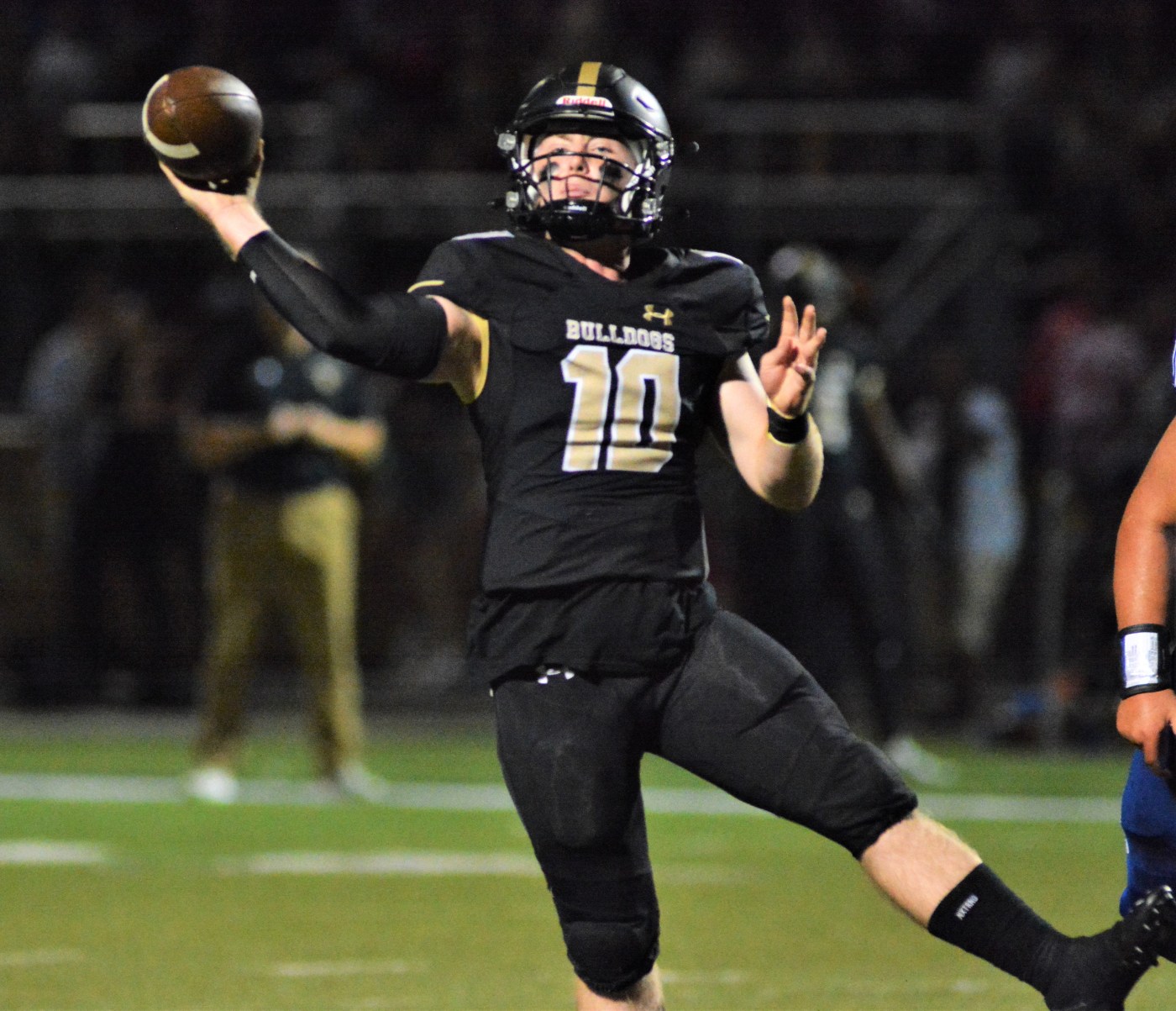 HOPEWELL TWP. — Simply put, you could not have dreamed a better scenario for the Hopewell Valley football team to secure the first perfect regular season in school history.

The task? Slay the dragon that has so often caused fits for everyone else in Mercer County. And to say the Bulldogs were up to the challenge is putting it lightly.

In what had all the makings to be the Game of the Year in Mercer County, Hopewell instead pulled off a stunning blowout of Notre Dame on its home Ackerson Field on Friday night, 53-21, to move to 8-0 and clinch the WJFL Capitol Division title.

In 19 years of varsity football, coach Dave Caldwell and the Bulldogs had only once started 7-0 back in 2013. That team lost its regular season finale and then won the Central Jersey Group III title, but never until Friday had Hopewell won eight straight games.

This year’s team came into the week ranked fifth among 16 qualifiers in South Group III, which will be divided into two different eight-team brackets. Hopewell will have at least one home playoff game. If it jumps to No. 4 in the rankings, it would be lined up for two home games as a top-two seed in one of the brackets when postseason play gets underway next week.

“I think what makes this group special is how they care for each other and how united they are,” Caldwell said. “I have 23 seniors and they’re just great leaders, they’ve got each other’s back. When one guy sort of doesn’t do what he’s supposed to do, they’re not afraid to call each other out and hold each other accountable. People ask, ‘What do you do to prepare for these games?’ These guys are locked in and they’re focused, and they’re just a great group of kids that want to compete, know how to compete and play hard for each other.”

Notre Dame (6-3) figured to be a worthy challenger for Hopewell because quarterback AJ Surace is getting offers from Power Five schools and its defense plays particularly fast and physically compared to most teams in Mercer.

Hopewell had other ideas. With explosive passes, relentless defensive line pressure and superior play on special teams, it took less than a quarter for the Bulldogs to show that they didn’t fear the Irish.

McKeown threw for four touchdowns in the first half alone — two to John Vlassac and one each to Wyatt Hartman and Kyle Machusak — as the Bulldogs mostly exploited short fields created by their defense and several Notre Dame penalties.

“We prepared very well,” McKeown said. “That’s a very well-coached team over there at Notre Dame. They have a ton of athletes over there, so just the game plan here really helped.”

Seniors Luke Reilly and Gael Vasquez led a dominant effort up front in which Hopewell repeatedly pressured Surace in the pocket and made it difficult for Notre Dame to get into a rhythm. Other Bulldogs such as Henry Saville made nice tackles when the Irish tried to create offense with quick passes to play-makers in space.

Caldwell said the plan was to stay in man coverage and not use extra defenders to create pressure, forcing Surace off his platform and to hold onto the ball longer.

“I’ve got competitors, man,” Caldwell said. “You look at our four guys up front between Luke Reilly, who I think is going to be the Lineman of the Year — he should be. He is just a complete menace in there, and then you’ve got Gael Vasquez. Those two guys are big boys, but they’re also super quick, and our defensive ends do a great job, too. I think it’s a team effort. I think we were pretty quick and strong up front.”

Still, the pregame hype looked promising when Notre Dame drove 65 yards for a touchdown on the opening drive and then stopped Hopewell at the Irish 45-yard line on the ensuing drive. But Notre Dame inadvertently touched the ball on a punt, allowing Hopewell to recover at the 9 and then scored on Vlassac’s 14-yard touchdown with 5:05 left in the first quarter.

Hopewell trailed by one after missing the extra point, but it was all Bulldogs from that point forward with 33 unanswered points going into halftime.

Hopewell scored on two straight drives that started near midfield, including a 42-yard touchdown catch by Machusak, who ran deep and was wide open ahead of the Notre Dame coverage.

Then after Notre Dame went three-and-out and turned the ball over at its own 20-yard line because of a high snap on a punt, the rout was on. Hopewell promptly scored again on a 3-yard run by Landon Schafer to make it 26-7, and the Bulldogs extended the lead to 33-7 with 39 seconds left in the half when Vlassac hauled in his second end zone catch.

Notre Dame briefly rallied to within 33-21 after two touchdown runs by Ta’Sean Powell in the second half, but Hopewell responded with its own potent rushing attack. In the final five minutes, Derek Van Brunt scampered to the end zone from three yards out and again on a 92-yard run following a Notre Dame turnover. Schafer added a second rushing score as well.

Hopewell will now attempt to win the second sectional title in school history, knowing that it will only get tougher from here on out

“I think we can for us as a team (win a sectional), but we’re just going one week at a time right now,” McKeown said. “Not getting in front and looking past somebody.”

Germany: ‘Reich Citizens’ Had Satellite Phones for Coup – The Connection to Capitol Invasion

Constantly new information becomes known about the extreme right "Citizens of the Reich" organization in Germany, which planned a coup and overthrow of...
Read more

Germany: ‘Reich Citizens’ Had Satellite Phones for Coup – The Connection to Capitol Invasion

Constantly new information becomes known about the extreme right "Citizens of the Reich" organization in Germany, which planned a coup and overthrow of...
Read more
French

Carrières-sous-Poissy: towards the abandonment of the A104 extension project?

the coronavirus is raging – stars in isolation