Ribeiro Neto remembers backstage of the Battle of the Aflitos 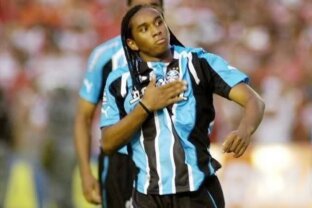 Memories of one of the most epic games in the history of Brazilian football are inevitable, when a duel between Náutico and Guild in the Afflicted. Especially with such similar circumstances. After all, Tricolor Gaúcho meets Timbu again in a Brasileirão Série B after 17 years. And the same stage as in 2005 can once again host an accession by the Rio Grande do Sul team. If Renato Gaúcho’s team beats Pernambuco on Sunday (23) and Sport, Sampaio Corrêa and Criciúma do not win their games on Saturday (22), the Guild will climb mathematically to the Brasileirão Serie A.

Ribeiro Neto was an eyewitness to history. The journalist from Rio Grande do Sul covered the famous Battle of the Aflitos in loco on the unforgettable November 26, 2005 in Recife. So in the program RS Ball Owners broadcast by TV Bandeirantes in Rio Grande do Sul this Friday (21), gave a behind-the-scenes account of the events of the match. At the time of marking the second penalty for Náutico in the final stage, the reporter said that Grêmio was determined to abandon the game.

player of Guild even asked the fans to invade

“The players were seized with a rage, they were expelled from the field, the Guild got seven. And there was only the penalty because some managers and Mano Menezes, by the way, Mano Menezes made the team stay on the field”, said Ribeiro Neto, referring to the current coach of the Internationalwho managed Immortal in 2005, in his first opportunity in a big club at the time.

The journalist added: “President Paulo Odone said he was being convinced and the Guild would go off the field. It was decided. And then Mano Menezes, Sandro Goiano and Galatto, in a speech that ‘I’m going to take it, I’m going to take it’ (the penalty), convinced that it would be, or that it would work. The conviction was that the damage to the Guild it would be much bigger”, said Ribeiro, adding that Grêmio midfielder Marcel even climbed the fence, inviting fans to invade the field.

No Náutico player wanted to take the second penalty

Ribeiro Neto continued his memoirs about the Battle of the Aflitos, stating that no one from the Náutico took responsibility for hitting the second penalty against the Guild. Previously, in the first half, Bruno Carvalho had wasted the first, charging on the post. “The Náutico people were smudged. So much so that one of the scenes that does not appear on television, I want to say that it is emblematic. The Náutico players, the most experienced, refused to take the second penalty. Kuki, among others, Potato himself who was later expelled. They didn’t want to”, explained the gaucho journalist, who continued.

“There was one boy left to beat, it was left-back Ademar. And the most incredible scene: these experienced, blurred, they went to warm up Ademar to take the penalty”, reported Ribeiro Neto, adding that the older players of Náutico were omissive. That is, they only knew how to encourage and give strength to the young Timbu player, during the “warm-up” for the collection of the maximum penalty, which would be defended by the goalkeeper of the team. Guild, Galatto. “The stadium died”, defined the journalist.

Mano Menezes celebrated being “on another level”

Finally, Ribeiro Neto revealed a conversation between Mano Menezes and the journalist after the match, which gave the title of the Brasileirão Série B 2005 to Guild. “Ribeiro, as of today I am on another level,” the coach told the reporter. Months before, Mano had left Caxias to take over Immortal. Until then, the coach was quite active in teams in the interior of the state. Soon after the victory, Mano Menezes’ career would take off in Brazilian and world football.

Thus, nautical and Guild will face each other for the 36th round of the Brasileirão Série B this Sunday (23), at 4 pm (Brasilia time), at Estádio dos Aflitos. The Pernambuco team can enter the field already mathematically relegated, if Chapecoense scores at home against Tombense today (21).