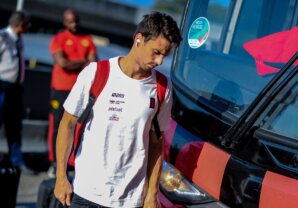 O Flamengo announced that defender Rodrigo Caio will undergo arthroscopy in his left knee and will no longer play in 2022. The player has not played since July 10, when he was injured in the defeat to Corinthians, for the Brasileirão. After confirming the need for the surgical procedure, journalist Renato Maurício Prado commented on the defender’s situation.

In his column on UOL Esporte, the red-black journalist highlighted the quality and professionalism of Rodrigo Caio. However, he pointed out that the defender only had a single year of acting at a high level with the shirt of the Flamengo, which was in 2019, right when he was contracted. After that, the player lived with consecutive injuries.

“It’s a shame to see the via crucis of such a talented and dedicated player, but with such a fragile body. What’s the point of insisting when your body screams that it can’t anymore? The most varied bruises are part of Rodrigo Caio’s history, since his Sao Paulo”, highlighted Renato Maurício Prado.

“The undeniable talent, allied to the recognized good character and the unassailable professionalism lead the Flamengo to keep trying to get it back. But until when? The cost-benefit of this relationship has long been debatable. (…) In the four seasons played with the red-black shirt, it was only in 2019 that he was really useful. It is difficult to believe that he will be so again, with so many physical problems. Even more, treated by Márcio Tanure”, completed the journalist, without missing the opportunity to snipe the doctor of the Flamengo.

In a video published on the social networks of the Flamengo, Rodrigo Caio made a point of talking about the injury and the delicate moment. Visibly downcast, the player recalled that, at first, the decision was for conservative treatment, but without success.

“I made a point of being there. Leave a message: I think it was a very difficult year for me physically and mentally. Some injuries caused me to practically miss the season. But I didn’t come to regret anything, on the contrary. I feel privileged for everything I’ve built in my career and for everything I have in my life. Without a doubt, it will be another obstacle overcome”, said Rodrigo Caio.

“At first, my option not to operate, along with the medical department, was because I believed that the process would be successful, but unfortunately it did not happen. I arrived in the last stage hoping to play without pain, but it didn’t happen. I believe that until the last stage I was feeling good. I want to leave a message for all the people who meet me on a daily basis, being a flamengoist or not. I always receive kind words. Rodrigo’s story did not end here. I strongly believe in my strength and God’s purpose. I made a point of leaving this message for the people who cheer for me. We will see you next season and I will do everything to deliver the most to the nation, which is the one who leaves us with the greatest conviction that it is worth all the effort to achieve our goals “, added the defender.

Check out the video in full:

In May 2016, a woman leaves her house in Voula and gets into her car, where the distant husband her. He walks...
Read more

In May 2016, a woman leaves her house in Voula and gets into her car, where the distant husband her. He walks...
Read more
French

Settlement of scores between travelers near Saint-Malo, a van attacked with a gun