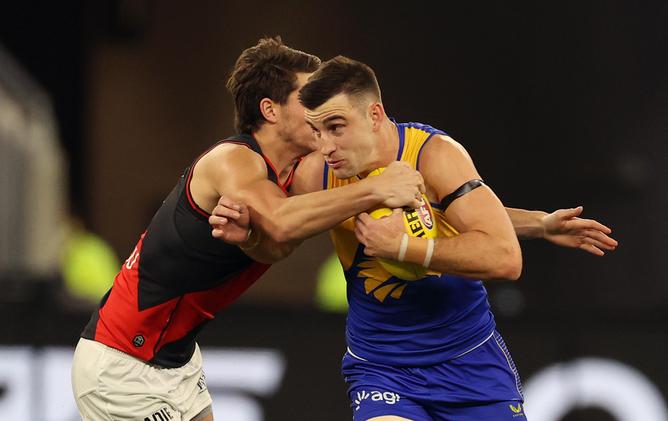 Willie Rioli dazzled and Josh Kennedy turned back time to lead West Coast to a drought-breaking and morale-boosting victory over Essendon at Optus Stadium on Friday night.

The Eagles ended a club record nine-match losing run, snapped a streak of nine straight losses at their home ground and jumped off the bottom of the ladder with their upset 10-point win over the Bombers.

In front of a raucous crowd of 40,933 that desperately willed their team across the line, Rioli shone with 19 disposals, three goals and four clearances as West Coast kicked their highest score of the season in the 16.11 (107) to 14.13 (97) victory.

Essendon coach Ben Rutten was left to lament how his side lost after winning the inside-50 count 58-42.

Having trailed by 22 points in the first quarter, the Eagles surged back into the contest on the back of an improved midfield effort as Kennedy kicked five goals and Elliot Yeo again impressed as a defensive rebounder.

Kennedy’s return of 5.0, his biggest bag in more than two years, stood in contrast to opposing spearhead Peter Wright’s 4.4.

It was the Eagles’ first win at home for 11 months, after they beat St Kilda in round 19 last year, and just their fourth victory in 23 matches since last year’s mid-season bye.

The result lifted West Coast off the bottom of the ladder and they will finish the round in 17th position unless North Melbourne defeat Adelaide on Sunday.

The Eagles will enjoy a nine-day break ahead of their first visit to the MCG this season, when they take on Richmond next Sunday. The Tigers dished out a 109-point flogging to an undermanned West Coast in round seven in Adam Simpson’s heaviest loss as coach.

The Eagles could welcome back ruckman Nic Naitanui should he successfully navigate his comeback from a knee injury in the WAFL on Saturday.

Having kicked 14.3 in their only previous win of the season against Collingwood in round four, the Eagles again rode their straight kicking as they booted 9.3 by three-quarter time to hold a five-point lead over the Bombers.

They held on despite late goals to Nic Martin and Harry Jones giving them a scare.

Share
Facebook
Twitter
Pinterest
WhatsApp
Previous articleTaylor Swift has released a new single… Britney Spears and Sam Asghari have moved…
Next articleYes, LFI MP Manon Aubry voted by mistake for the extension of the health pass in the European Parliament

1:52 PM ISTRob DawsonCorrespondent Cristiano Ronaldo will not train with Manchester United on Monday after the club gave him permission to delay his...
Read more
Sports

We are all mortal. No one is eternal. But our...
Read more
Technology

Hannes and Cleo ready for Way out west

1:52 PM ISTRob DawsonCorrespondent Cristiano Ronaldo will not train with Manchester United on Monday after the club gave him permission to delay his...
Read more
Sports

We are all mortal. No one is eternal. But our...
Read more
Technology

Hannes and Cleo ready for Way out west

The Anglo-Arab era begins in Palermo. Soon the start of the City Football Group conference

The press conference for the presentation of the new ownership of Palermo which, after promotion to Serie B, officially passes to the City Football...
Read more
Technology

The time has finally come to break free. To liberate ourselves and lean into the boundless joy of pure self-expression. And the stage for...
Read more
Load more
Facebook
Instagram
LinkedIn
Pinterest
Tumblr
Twitter