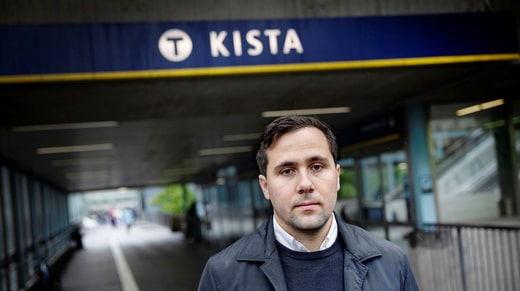 The market-liberal think tank Timbro enters the school debate with a recent investigation that DN has read: “This is how the school market can function better – ten feasible reforms”.

With it, Timbro wants to show that the competition from the independent schools contributes to the municipal schools performing better.

But it also highlights a number of problems and suggests changes that Timbro’s boss Benjamin Dousa believes are necessary to save the system of independent schools and school choice.

Benjamin Dousa already when he was chairman of the Moderate Youth Union criticized that bourgeois politicians were so passive in the free school issue.

It’s obvious to everyone that today there are schools that are of low quality, cheat and that use the system in an improper way, he says.

– Therefore, it is frustrating that from the right side still do not want to do anything about the problems that everyone sees. Since the 1992 reform, no major corrections have been made.

First and foremost, he says that supervision needs to be tightened and highlights the British supervisory authority Ofsted, which among other things scores schools. It is a system he believes that the Swedish Schools Inspectorate should introduce and gives an example from his own upbringing.

When he was nine years old and in third grade at a school in Kista, his mother realized that he did not learn Swedish well enough in the school he went to. This made her want to move him to another school.

– My mother who was a cleaner had no idea which schools were good or bad. It is tougher for the socio-economically weak groups to know what to choose. Therefore, I believe that such a grading would make it easier for more people to choose a school for their children.

The schools that do not maintain a high enough quality of teaching should also not be allowed to take any profit, says Benjamin Dousa.

If they maintain poor quality for a longer period of time, they should also be able to be procured to outside actors while the main responsibility passes to the state. The state must then be able to run the school until the procurement generates sufficiently good tenders, he says.

The choice of school also needs to be made mandatory, according to the report. Today, it is above all well-educated parents who choose school. This means that those with a poorer starting point are placed in the same schools in vulnerable areas, which further strengthens the gaps.

– It is a system that is unfair, and which means that all children do not get the same chance to succeed in life, says Benjamin Dousa.

In order for children with different backgrounds to be better distributed between the schools, he thinks that schools should be allowed to use the lottery as an admission method because it gives everyone the same chance to enter a popular school.

A really hot potato in the discussions concerns the financing of independent schools. The government recently presented a proposal to allow the municipalities to reduce school fees for independent schools because they do not have an equal responsibility.

– If there are new students, new arrivals or immigrants from another municipality, and only municipal schools need to bear the capacity and costs it requires to receive them. Then it is unreasonable if independent schools are allowed to take part of that money as well, says Benjamin Dousa.

Therefore, it is reasonable to remove precisely these “compulsory school costs” from the compensation that goes to independent schools, he says.

Some of Timbro’s reform proposals

● Make school choice compulsory so that everyone participates.

● Limit queue time. If several students have the same queue number for a desired school, the lottery should be allowed to decide. It also makes it possible for schools to use the lottery as the main admission method.

● Convert the national exams in the last year to degree writing. This increases the motivation to work hard and the importance of individual teachers’ grading decreases.

● Also introduce external correction of national tests and standardization of teachers’ grades. Today, they are corrected in schools – which means that schools can set too high grades to attract students.

● Make unannounced inspection visits. Today, they are almost always pre-announced, which means that schools can have a prepared façade.

● Let the state take over schools that are bad for a long time, and let them be procured to other actors.

Patrick Harvie: ‘De facto’ vote may be only way to ask Scots about independence

A “de facto” referendum held in the form of a general election could be the only way to stage a vote on independence, Patrick Harvie has said. ...
Read more

Patrick Harvie: ‘De facto’ vote may be only way to ask Scots about independence

A “de facto” referendum held in the form of a general election could be the only way to stage a vote on independence, Patrick Harvie has said. ...
Read more
World