The Saint-André revolution at the MHR, gone from dying to Top 14 finalist 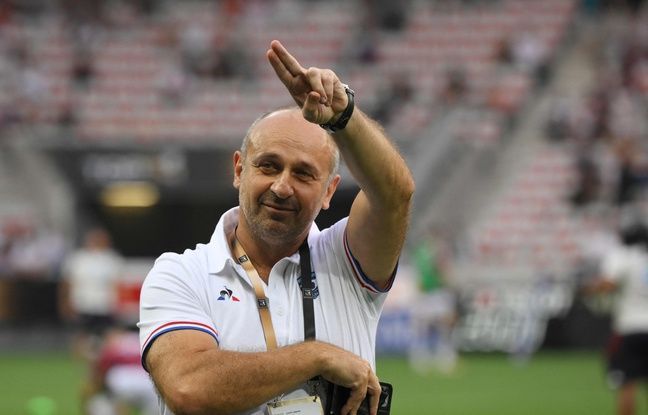 January 3, 2021. Montpellier finds himself in limbo Top 14. After a year and a half at the head of the first team, Xavier Garbajosa is replaced. “The suit was too big for him. He was not ready,” said the president of the MHR, Mohed Altrad. A year and a half later, the evolution is spectacular. Montpellier has once again become a Top 14 great, still in search of its first Brennus shield, but qualified for the eighth time in eleven years in the final stages.

Not enough to usurp the status of favorite. ” We are not favorites, we know it. We play a team that is used to making finals, ”tempers Philippe Saint-André, the architect of this revival. And to win them since the CO has won five out of the seven in its history. But on what they show the team for a year and a half, the Héraultais have the means to compete. “Our atypical group, with great veterans, players who have failed in certain clubs and are coming back. There are stories of men, of talent too, ”continues the MHR coach.

“We were called the South African franchise. It has changed a lot”

This is one of the big differences between this Montpellier and its predecessors. “We were called the South African franchise a few years ago. All that has changed,” recalls Mohed Altrad. With young French hopefuls, players recruited in Pro D2 and still a few stars to supervise this team, the course is radically different.

“There are no longer these groups that lived a bit next to each other,” explains Sébastien Kuzbik. The former Bordeaux-Bègles, Clermont and MHR winger, whose jersey he wore more than a hundred times, remained close to many players. “This is one of the explanations for this success. There are always affinities, it’s normal, but it seems to me that the group is much more united than it was in the past. The role of elders off the field, such as Fufu |Ouedraogo]or Benoît Paillaugue has a lot to do with it. But the staff favored him, including in his choices: there is competition everywhere and more privileged places. Like the position of opener where the young 22-year-old Italian Paolo Garbisi will once again be established against the CO in place of the sudaf world champion Handré Pollard.

“A lot of room left to his assistants”

A group, a club. This is one of the other successes of the former coach of the France team, who continued the direction taken by Xavier Garbajosa: “From the training center to the first team, there is a guideline, explains the co-director of the center Joan Caudullo, with Anthony Floch. We work with the same game systems, the same announcements, right down to the announcements on the sidelines. The raises, the ways of playing are the same. The matrix, the base is identical. When a player arrives in the first team, he has already gained a lot of time. Prospects are completely integrated into the functioning of the one team. Until training. During the week, Philippe Saint-André and his staff, for example, asked them to produce the same game launches as the CO to better counter them.

“I find Philippe very human, very open, continues Joan Caudullo. He can be serious and demanding at the same time, but let go a little so that things go well. But his greatest strength is putting people in the right place. “Arrived as rugby director, Philippe Saint-André has kept a distance from the field and offers a lot of responsibilities to his assistants, in particular Jean-Baptiste Elissalde and Z, alias Olivier Azam. Confirmation from Mohed Altrad: “He brought in a staff whose members get on very well with each other and who are very competent. Like the former international referee Alexandre Ruiz. We are one of the least sanctioned teams in the Top 14 and there is a reason for that”.

In Montpellier, PSA has rediscovered the pleasure of coaching. And to win, he whom the world of rugby had ostracized, after his failure with the Blues and a humiliation in the quarter-finals of the World Cup against the Blacks (62-13). “It’s the first time I feel totally confident with a coach,” recalls Mohed Altrad. An image of winner shaped in England, in Gloucester and Sale, before being damaged with the XV of France. Its revival will become vibrant if the MHR raises its first Brennus this Friday night.

A 47-year-old man died last night in a stabbing in the center of Delft, a 48-year-old fellow citizen has been arrested by the...
Read more

A 47-year-old man died last night in a stabbing in the center of Delft, a 48-year-old fellow citizen has been arrested by the...
Read more
Technology

The adaptations of video games in series or film never end. And as SEGA is satisfied with the success of Sonic on the big...
Read more
Load more
Facebook
Instagram
LinkedIn
Pinterest
Tumblr
Twitter