The galley of African refugees in Marseille 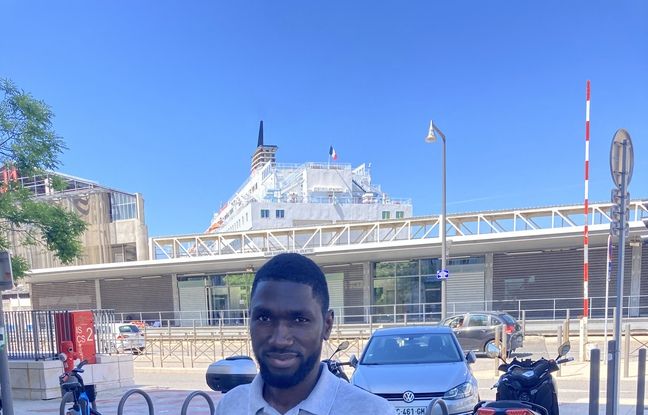 Like many foreigners from the Maghreb or black Africa, Bella Diaby experienced, at the start of Russia’s invasion of Ukraine, real difficulties in leaving the country and fleeing the bombs. He succeeded, but not without difficulty. For, once in France, having to… once again face serious administrative disappointments because of his nationality. Faced with the violence of the situation and its flood of refugees, the Council of the European Union nevertheless set up an exceptional system at the beginning of March: the provisional residence permit (APS).

For Ukrainians, obtaining this precious sesame is almost a formality. But for Bella Diaby, a Guinean who arrived in this country in 2013 to continue his studies – an attempt which he later transformed by finding a job as an engineer in the construction industry, in Kharkiv –, it is quite different. Despite his 10-year residence permit.

To the sound of explosions

Go back. February 24 begins the invasion of Ukrainian territory by Moscow. Kharkiv, the country’s second largest city on the Russian border, is bombed. Bella and her roommates spend a night in the basement of their building, to the sound of explosions. At dawn, they decide to flee. Here they are in Kharkiv station to try to reach Lviv, in the west of the country. “There, they said that the trains were for women and children, that men could not leave. But on the quay, there were only blacks and North Africans left, ”recalls the 35-year-old young man. He will eventually manage to board a wagon.

After a trip strewn with pitfalls, Bella Diaby reaches the Polish border. Where he had to face, according to his words, the same difference in treatment between refugees: “Foreigners had to wait three to four days, in the cold, without food, we only had access to tea or coffee. At night, we burned the few clothes we had in our bags to keep warm. »

The rest of the trip will be Berlin, Paris, then finally Marseille. Where the Guinean faced a new difference in treatment. He says: “I went to the prefecture on April 5, where I was told that I was not Ukrainian, and that I could leave. “It took the intervention of Margot Bonis, project manager for law and access for the Marseille Hospitality Network, and the lawyer Me Philippe Perollier, who denounced this “refusal of a counter”, for Bella Diaby to obtain an APS of a month on a second date. The time that his file is examined, which allows him as a permanent resident in Ukraine to benefit from a APS of 6 months giving the authorization to work and stay in France. The young Guinean finally got it on May 4.

For its part, the prefecture claims to have granted “2,331 APS on June 14” by its services. Stating: “The APS are issued the same day if the files are complete. If supporting documents or translations are missing, interested parties are invited to present themselves spontaneously as soon as they have all the documents. “And she maintains that” less than a dozen people did not bring enough supporting documents to allow the issuance of an APS. In this case, a one-month APS was issued to them in order to carry out a more in-depth examination of the file. »

A version that the Hospitality Network project manager disputes: “There are many cases of this kind of blockage, we have organized ourselves to take up each situation, assures Margot Bonis. And that seems specific to Marseille. In Paris, all refugees from Ukraine can benefit from a minimum of one month’s APS while their case is being processed. There is a real inequality of treatment at the national level. Me Perollier insists, without mincing his words: “For the Ukrainians, things are going well. But for the others, it’s a real disaster, it’s abominable. The lawyer explains, through another example: “The European decision allows the temporary protection of all members of the same family. However, in the case of a couple where the lady is Ukrainian and the gentleman Moroccan, the prefecture asked that the latter present his permanent residence permit. This does not have to be required, since they are spouses! We had between 30 to 50 similar cases on the Mediterranean, the Corsica Linea boat where the Ukrainian refugees were accommodated, in the port of La Joliette” until the beginning of June.

“I was able to stay in Marseille”

But for Bella Diaby, everything now seems to be on the right track: “When the boat where we were staying closed, some were sent to other cities. But as I had just found a job – I have a job in a supermarket – I was able to stay in Marseille. I’m in a studio in the 13th arrondissement. »

After the commercial: Bingolotto’s presenter – do you remember everyone? (0:39) Turn on sound After the success abroad, the program Naked Attraction hit like a bomb...
Read more
World